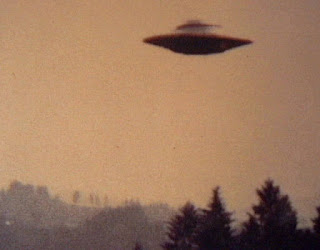 Wow. The UFOers will have more to feast on now as MoD releases secret files on UFOs:

Hundreds of documented sightings of UFOs across the UK will be released by the MoD to the National Archive in the coming weeks.
***
A spokesman for the Ministry of Defence said the secret files date back more than 10 years.

He said: "The files contain information about UFO sightings by members of the public and include photographs that people have taken or drawings they have done.

"There is no scientific data included in the files just the public reports which may also include a comment from nearby RAF bases saying whether there was flight activity when the sightings took place."

A north east Wales resident has called for an explanation after spotting a UFO.
The man, who did not want to be named, claims to have seen a strange object in the sky above Overton, near Wrexham, at about 6am on Friday.

This is the latest in a string of UFO sightings in the Wrexham area in recent months, prompting one flying saucer enthusiast to dub the region "a UFO hot spot".

I've seen some strange things at 6am, too, depending on how many Irish coffees I've had...

I also recognize an invitation to tourists, too. Can you spell Loch Ness?


Okay, here's a challenge to the all the sailors in the reading population...if you have ever seen a "UFO" while at sea, drop me an email (see the "email" thingie over at the side for the address). I mean some people think UFOs, weel, USOs, are under the sea, too. See also here and here.

Stories --I mean reports- of ghost ships will be accepted, too. And weird things happening to your compasses (especially your gyro)....

UPDATE: I should add that it was pretty common for our stern watch to report UFOs when we transited from San Francisco to the Philippines - and Venus was rising in the East...
Posted by Mark Tempest at 3/04/2008 06:19:00 PM

Email ThisBlogThis!Share to TwitterShare to FacebookShare to Pinterest
Labels: UFOs at sea