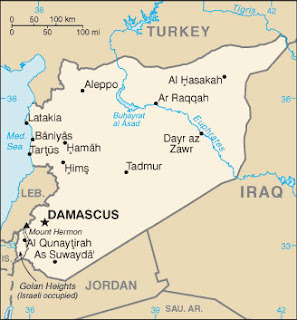 Ships making port calls in Syria will get extra scrutiny, as reported here:

Syria was placed on a so-called "Port Security Advisory List" amid "concerns about the connections between Syria and international terrorist organizations," the State Department's deputy spokesman Tom Casey told reporters.

The move allows the Coast Guard "to impose some additional port security measures to ships traveling to or arriving in US ports that have previously been either departing from Syria or have called on Syrian ports," he said.

Casey added he understood the measures would affect any ship that has visited Syria during its last five ports of call...
***
The development marked yet another turn for the worse in a relationship that clearly started to sour again at the end of January when Casey said it was time for Syria to stop its alleged abuses of human rights and support for terrorism.

Washington had long complained of Syria's support for opponents of the Middle East peace talks, such as the radical Hamas movement in the Palestinian territories and the pro-Iranian Shiite Muslim group Hezbollah in Lebanon.
***
A US Navy official said Wednesday that the warships USS Ross and the USS Philippine Sea have relieved the USS Cole to take up positions in the eastern Mediterranean off Lebanon, which is just south of Syria's own coastline.

"It's a sign of our commitment to stability in the region," said Bryan Whitman, a Pentagon spokesman.

The Cole was deployed to waters off Lebanon to signal US concern over a protracted political crisis in Lebanon.

I expect wacky Bush haters to see a conspiracy to use trouble with Syria as a stepping stone to Mr. Bush declaring himself "president for life."
Posted by Mark Tempest at 3/09/2008 06:52:00 AM