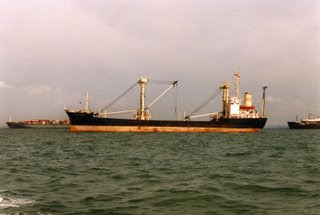 Conspiracy? Pirates? Or a sunk in a storm? Some family members see conspiracy.

The Times of India reports here a conspiracy theory built on a very thin reed:

Family members of the crew of missing vessel M V Rezzak on Thursday alleged that there was a well-planned conspiracy behind the mysterious disappearance of the ship. They claimed to have procured official documents indicating that ship had been targeted by "some very powerful agency in Turkey".

Family members said they had managed to get hold of a copy of an official document sent by the Marine Rescue and Coordination Centre (MRCC) in Turkey to the director-general of shipping (DGS) stating that the life rafts, life jackets, tarpaulins, gas cylinders, sea survival kits, buoys and lifeboats recovered from the Black Sea during search operations did not in fact belong to M V Rezzak. ‘The name that was found inscribed on the recovered material was Asean Energy,' said V Krishnan, brother-in-law of the chief engineer of M V Rezzak.

The missing vessel was named Princess Ruby in 1982 when it got commissioned and later became Tomas Amigo in 1986, Asean Energy in 1990, Bang Yuan in 2005 and finally, M V Rezzak in its 25 year-long maritime life.

"Port authorities all across the world, especially around Europe, are particular about items on the deck of a ship being registered under the same name as the vessel. It is highly unlikely that lifebuoys on M V Rezzak would be registered under Asean Energy. To find items with the name of Asean Energy and then link it to M V Rezzak is only being done to mislead us and to divert investigations," said Krishnan.

According to family members, senior officials from DGS had admitted that the day M V Rezzak took off from Russia, extreme weather was recorded. And under normal circumstances, ships would not have been allowed to set sail...

Unexplained by the conspiracy theory is who would have retained all that deck equipment with the former ship's name except the ship. And why, if there was a plot, the plotters would not have been sharp enough to use updated lifebuoys, etc.

There is also a report that the ship was not seaworthy and had been held in port to correct deficiencies:

Shipping officials and investigators have from day one suspected that M V Rezzak, the cargo vessel which went missing last month in bad weather in the Black Sea with 25 Indian sailors, may not have been sea-worthy.

Now, it turns out that an inspection conducted by port authorities in the Russian city of Novorossiisk before the ship set sail for Turkey had nailed that fear and named a long list of 37 deficiencies that may have endangered the lives of the crew, The Sunday Express has found. The ship was reported missing on February 18 on a busy sea lane about 120 nautical miles (220 km) from the Turkish coast and two rounds of searches have proved futile. But before it began its fateful journey, the ship was detained by Novorossiisk port authorities for 15 days and asked to rectify its troubles, which investigators “presume” it did.

However, the vessel’s certification agency has revealed that it was allowed to sail despite its inability to fix three vital deficiencies as it could not be done in Novorossiisk.

M V Rezzak, with its heavy cargo of steel billets, was given permission on the condition that it would attend to the three problems in the Turkish port of Bartin, its destination. It never made it to Bartin.

The Sunday Express obtained a copy of the inspection reports which listed the 37 problems with M V Rezzak, which included the lack of proper certification for sailing for sea-farers, six problems with life-saving appliances, five problems with fire safety measures and 11 problems with stability, structure and related equipment.

It also listed three problems with propulsion and auxiliary machinery, which investigators said was crucial since M V Rezzak was carrying a high-density cargo. Besides, it also had four deficiencies in navigation safety areas and one relating to radio communications.

Bad weather, heavy cargo - recovery of more than just a life ring. I'm afraid for the families that this sounds more and more like a ship taken by the sea and not by pirates.
Posted by Mark Tempest at 3/09/2008 06:23:00 AM