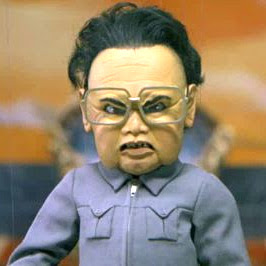 Reported as North Korea raises stakes with missile launches. The DPRK is back to its old blackmail tricks, once again testing missiles and threatening a slow down in nuclear weapons program disabling:

North Korea raised the stakes Friday in its nuclear disputes with South Korea and the United States, test-firing several missiles and warning it may slow down work to disable atomic plants.

The North also warned against any "provocative actions" along its disputed western sea border with South Korea, the scene of bloody naval clashes in 1999 and 2002.

The test-launches and warnings came one day after the North Korea expelled South Korean officials from a joint industrial estate, in protest at the new conservative Seoul government's tougher policy towards Pyongyang.

Lingering flood damage, high commodity prices and political wrangling with the South could push impoverished North Korea this year into one of its worst food shortages since a famine in the 1990s, experts said.

North Korea might make concessions on humanitarian issues in order to receive handouts from South Korea, but Pyongyang's leaders would try to keep any crisis on its farms from spilling over into international nuclear disarmament talks, they added. North Korea, which even with a good harvest still falls about 1 million tonnes, or around 20 percent, short of the food needed to feed its own people, relies heavily on aid from China, South Korea and UN aid agencies to make up the gap.

"If the South and the global community fail to send food aid to the North, we might see a food crisis even worse than the one in the 90s," said Kwon Tae-jin, an expert on the North's agriculture sector at the South's Korea Rural Economic Institute.

A famine in the mid-to-late 1990s killed more than 1 million North Koreans in a country of about 23 million.

North Korea for years has been able to receive massive food aid with few questions asked by left-of-centre South Korean governments who have seen the handouts as a small price to pay to keep the peninsula stable.

But a conservative government that took power in South Korea last month said there would no longer be a free ride for its capricious neighbour. North Korea's slow-moving government has not yet adjusted to the policy change, experts said.

New President Lee Myung-bak wants to tie aid to progress his communist neighbour makes in nuclear disarmament, reuniting families separated by the 1950-53 Korean War and returning more than 1,000 South Korean citizens believed to be still held in the North.

North Korea typically asks the South to provide it with about 300,000 tonnes of fertiliser for its spring planting as well as with 500,000 tonnes of rice. The North has been quiet this year.

"North Korea has yet to ask for fertiliser aid most likely in fear of facing rejection from the South," Kwon said.

Without the fertiliser, North Korea is almost certain to see a fall of several tens of tonnes in its harvest, Kwon said.

The North will start to feel the shortage the hardest in the coming months when its meagre stocks of food, already depleted by flooding that hit the country last year, dry up and before the start of its potato harvest in June and July.

Of course, as previously noted here, humanitarian food is being diverted to the North Korean military.
Posted by Mark Tempest at 3/29/2008 06:25:00 AM