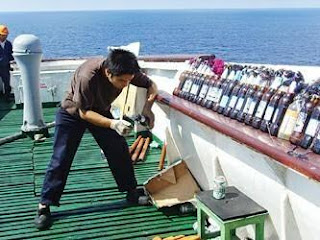 Remember the dramatic photos of the crew of a Chinese merchant crew preparing "Molotov cocktails" to greet armed Somali pirates who boarded their ship? See here. Their shipping company now has provided the crew with bonuses for preventing the capture of the ship, as set out here:

A Shanghai shipping company has rewarded 30 of its seamen with 10,000 U.S. dollars each after they successfully fought off a pirate attack off Somalia in the Gulf of Aden.

Each crew member of the cargo ship, Zhenhua 4, was being rewarded for their bravery and courage, said Guan Tongxian, president of Shanghai Zhenhua Port Machinery Co.

The crew received the reward in a commendation ceremony at Changxing Island Port, after their vessel returned to Shanghai on Thursday morning to be welcomed by crowds of people.

Nine pirates armed with rocket launchers and heavy machine guns boarded the ship on Dec. 17. The crew locked themselves in cabins, using fire hoses and self-made firebombs to keep the attackers at bay for six hours.