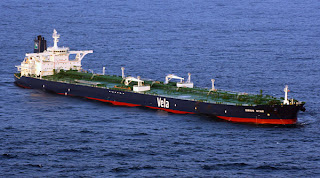 Somali pirates say they have released a Saudi-owned tanker carrying two million barrels of crude oil that they hijacked in the Indian Ocean.

"All our people have now left the Sirius Star. The ship is free, the crew is free," Mohamed Said, the leader of the pirate group, told the AFP news agency on Friday.

Farah Osman, an purported associate of the pirates, told the Reuters news agency that a $3m ransom had been paid for the 330-metre tanker owned by the shipping arm of oil giant Aramco.

"Pirates holding the Saudi ship took $3 million yesterday evening and then released the ship this morning," he said.

UPDATE: Well, now we know the price of a VLCC full of oil. That's a lot of khat for the pirates and their leaders - don't be surprised if the new pirate business model involves more hunting for such "high value units" - even if off the normal, well-beaten sea lanes...
Posted by Mark Tempest at 1/09/2009 09:50:00 AM