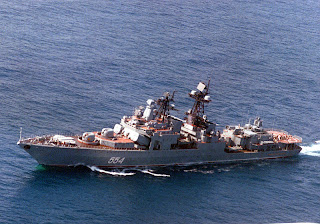 Reported as Russian navy thwarts attack by Somali pirates on Dutch vessel in Gulf of Aden:

A Russian warship helped foil an attack on a Dutch container ship by suspected Somali pirates in the dangerous Gulf of Aden, a maritime watchdog and the Russian navy said Wednesday.

The pirates chased the vessel for about 30 minutes but aborted their attempt to board the ship after a Russian warship and helicopter arrived at the scene, Choong said.

***
Russian navy spokesman Capt. Igor Dygalo said a Ka-27 helicopter was sent from the Admiral Vinogradov warship on patrol off Somalia's coast and fired at three suspected pirate speedboats that were trying to attack the Dutch ship.

He said three pirates were wounded.