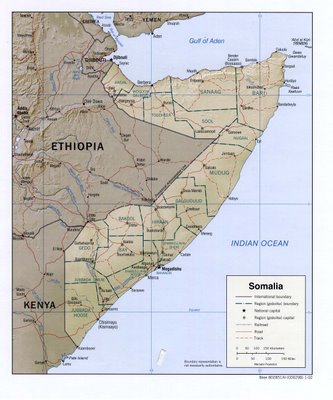 Militants who captured a South Korean fishing vessel off the coast of Somalia denied Wednesday they were pirates and said they were defending their waters from illegal fishing.
***
Abdi Garaad Daahir, a militia spokesman contacted by The Associated Press via two-way radio, said fighters from his clan had captured the vessel fishing illegally in Somalia's territorial waters.

"We are not pirates, but we are patriots who stood up to defend our sea resources from those taking advantage of their country's lack of central government and coastal guards," he said.

But South Korea disputed this, saying the pirates seized the vessel in international waters and later took it to Somalia's waters.

Somalia has had no coast guard or navy since 1991, when warlords ousted the ruling dictator and then turned on each other.

Prior posts on the Somali fish wars here, here and here. As noted in one of those posts: