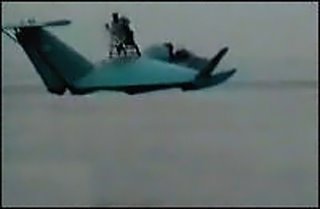 Regime Change Iran has the link to MemriTV here.

Even funnier than I thought before I saw the entire video.

Pretty impressive speed on the "Flying Boat" of 100 "knots per hour" (why is that always so funny?) which I guess means 60 miles per hour. But they claim they are going to build a bunch of them... so that no gunner with a naked eyeball will feel left out, I suppose...

Shades of the Marianna Turkey Shoot...

UPDATE: Speaking of analysis of the recent Iranian announcements of "amazing" weapons, this is pretty good. Especially this:

Iran announced last Friday that it had successfully test-fired a missile that could avoid detection by radar and deliver multiple warheads to hit several targets.

General Hossein Salami, the air force chief of Iran's Revolutionary Guards, hailed the development of the Fajr-3 (Dawn-3) missile as the achievement of "a remarkable goal".

But Ivan Oelrich, vice-president of the Federation of American Scientists, said: "It is conceivable they have a multiple warhead capability but this is not very sophisticated. Though three missiles heading for the same target makes it harder for missile defence, the warheads will not have their own guidance systems and the missiles will carry a lower payload. It would be difficult to target effectively with them."

On Sunday Iran announced another success: the launching of "the world's fastest underwater missile", travelling at about 195 knots, or three times faster than the fastest western torpedo.

General Ali Fadavi, deputy naval commander of the Revolutionary Guards, said the weapon could overcome sonar systems because of its speed and its movement underwater. Weapons experts said it appeared to be a Soviet rocket-powered torpedo known as the Shkval.

However, it cannot track a target and has a range of less than four miles. A former commander of the Russian Black Sea fleet, Admiral Eduard Baltin, said Iran's torpedo announcement was little more than a bluff.

"Shkval has no target designation devices. That is, it is not a self-homing torpedo. Besides, it leaves a trail, which makes it easy to spot and destroy," he said.