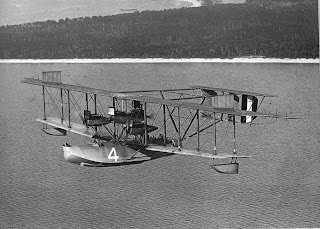 Eighty-nine years ago there was the Flight of the NC-4:

In 1919, the Navy's NC-4 and a crew of six made the first successful transatlantic flight. It took some three weeks, May 8-27, to accomplish that. Humans had only taken wing in airplanes less than 20 years before, and Lindbergh's Paris flight was still eight years away.
***
NC-4 was the first in 1919, and for always.