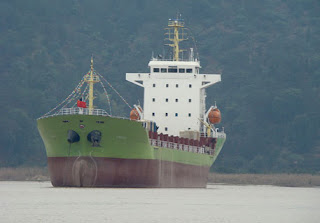 Andrew Mwangura of the East Africa Seafarers Assistance Program says the two ships were taken on Wednesday, near where a Dutch ship was seized on Monday. He says he has no information about the owners or the nationalities of the crew onboard the MV Lehmann Timber or the MV Arena, or any information on the pirates' demands.

UPDATE: Photo is of "Lehmann TImber" from here. Lehmann shipping info here. Still looking for info on other ship. In the meantime, some Somali authorities have been making noises about attacking the pirates - an effort Russia has asked them to stand down:

Russia today called on Somalia not to take any action that may jeopardise the safety of Russian and Filipino crew members aboard a Dutch vessel recently seized by pirates.

''Following reports that the Somali government made a decision to use force to release the crew of the vessel, seized on May 26, Russia urges Somali authorities to refrain from any action that could put the lives of the crew in danger,'' Russian Foreign Ministry said in a statement.

The ministry said it was in contact with the owner, Dutch Reider Shipping, and governments capable of assisting in the release of the sailors.

The cargo vessel Amiya Scan, under the flag of Antigua and Barbuda, was captured by Somali pirates in the Gulf of Aden last Monday with four Russians and five Filipinos on board.

Ahmed Said Ownur, fisheries and water resources minister of Puntland, a breakaway region in the northeast of the African state, confirmed yesterday that a mission had been launched to release the ship by force and asked the ship owner not to pay ransom to the pirates.