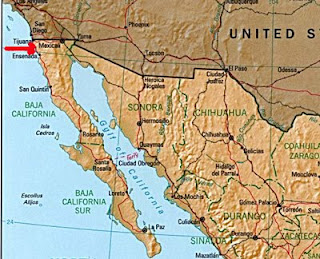 NIMBY, NIMBY, NIMBY. Keep saying that as whiny Californians will get their natural gas fed to them from a foreign country. Sempra LNG opens up its Baja LNG terminal near Ensenada, as reported here:

"The start of operations at Energía Costa Azul represents the culmination of seven years of development activity involving the acquisition of permits and commercial contracts, construction, start-up and testing," said Darcel L. Hulse, president and chief executive officer of Sempra LNG. "The journey from an idea to a whole new business has been both challenging and satisfying."

Energía Costa Azul's first cargo of imported natural gas arrived April 18 aboard the Al Safliya, a new, state-of-the-art LNG carrier from Qatar. A second LNG ship, the Bluesky, arrived at Energía Costa Azul May 6 with a cargo of LNG from Trinidad. The stringent performance testing is now complete and the terminal has successfully met all of its design criteria.

The terminal is fully contracted and capable of processing 1 billion cubic feet per day (Bcf/d) of natural gas, with room for expansion. While Sempra LNG owns 100 percent of the facility, the company is leasing half of Energía Costa Azul's processing capacity to Shell International Gas Limited under a 20-year agreement. Sempra LNG's half of the capacity at Energía Costa Azul will be supplied from a new liquefaction facility nearing completion at Tangguh, Indonesia. Shipments from the Indonesian facility should begin arriving in the second quarter of 2009.

The natural gas processed at Energía Costa Azul will be used in Baja California and the U.S. Southwest. Natural gas from the terminal will meet applicable Mexico and U.S. gas pipeline quality standards.

I applaud Sempra's success, but deplore the NIMBY attitude that causes businesses to have to locate such facilities in neighboring countries to avoid the NIMBYs. I guess the jobs associated with the LNG facility and the lower cost of shorter pipelines don't matter to some vocal, and in my view, misguided groups in California.
Posted by Mark Tempest at 5/17/2008 08:51:00 AM

Email ThisBlogThis!Share to TwitterShare to FacebookShare to Pinterest
Labels: LNG