Much of the commerce of the U.S. is carried on rivers and such navigable waters as barges and flatboats can travel. Steamships allow goods to move fairly easily upstream as well as down. Ships ply the coastal trade. Goods from foreign countries come in by ship and are passed along through a relatively primitive but ever growing network.

For a variety of reasons, the northeastern United States has become a manufacturing center, the southeastern U.S. largely agrarian. The South is highly dependent on imported goods, traded for cotton.

When war erupts between the states, General Winfield Scott, knowing all of the above, develops a strategy designed to strangle the Confederacy by cutting off imports and exports and to split the Confederacy in two by seizing control of the Mississippi River and all of its navigable tributaries. This will also have the effect of limiting CSA troop movements and allowing Union forces to squeeze the south by pushing from the Mississippi River toward the Atlantic. Of course, the first part of the problem was to get control of the Mississippi. From the north, General Grant began working his way down the Tennessee and Cumberland Rivers, working closely with Union Navy forces. Success by these Union forces drove the Confederates down the river. In the meantime, Union naval forces blockading southern ports began to look at expanding their mission. Part of that new mission including closing the gap with General Grant by moving up the Mississippi River from the Gulf of Mexico. 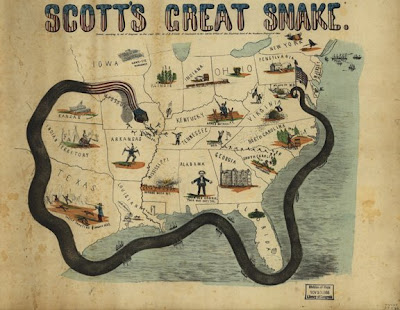 The first major roadblocks on the Mississippi River in the path of the Union Navy were the defenses set up in and along the river at and below New Orleans. New Orleans, contrary to many people's impression, does not sit on the Gulf of Mexico, but lies about 100 miles upriver from three main entrances to the river through it delta - these entrances are referred to as "passes."

In addition, the river is not straight, but has many bends and twists as you move up the river from the Gulf of Mexico. At one of these bends- Plaquemine Bend- about 90 miles south of New Orleans, the Confederates had a fort, Fort Jackson and barrier in the water blocking the river.

Naturally, a river is a narrow, restricted waterway and the Mississippi is also full of sandbars and other obstacles. The effect is to limit the freedom of movement of major ships - an advantage the South sought to exploit by the placement of its forts.

If you made it by Fort Jackson, another fort, Fort St. Philip, sat on a narrow place in the river - the Mississippi shrinks to 700 feet in width at that point. It is fair to call the areas covered by these two Confederate ports "chokepoints." On the map below, New Orleans is "A" and the arrow "B" points to Plaquemine Bend and the forts. 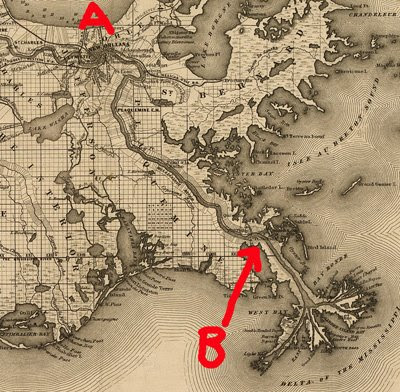 With an adequate defensive force, New Orleans and its river approach would be a tough nut to crack. However, in April 1862, however, the CSA was short of men to protect New Orleans - troops were being rushed northwards to help defend against Grant's southerly push. The removal of these troops and the failure to replace them to protect a major strategic asset was a remarkable mistake by the Confederate leadership.

Despite the inadequate Confederate defense, conservative commanders thought that getting control of New Orleans and the lower Mississippi would require a large force of Army troops making then reluctant to commit to its capture. But a very aggressive Navy 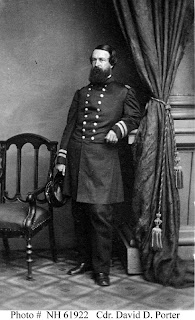 commander, David Dixon Porter (his picture on the right), believed that the New Orleans could be captured by naval forces alone- 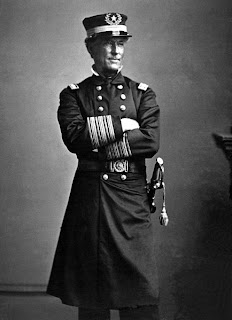 and he managed to convince higher authorities in Washington to try it his way - but with Commodore David Glasgow Farragut (his picture on the left) in command. Porter got command of a flotilla of mortar boats which he had argued could lay siege to the two forts and the in-river barrier. As it is written in Sea power: A Naval history (2nd ed., E.B. Potter, ed, USNI, 1981, p.137):

Porter argued that a fleet of mortar boats could wreck forts Jackson and St. Philip to the point where deep-draft naval vessels could pass upriver and threaten the city.

Farragut collected a group of ships and gunboats. Porter had 21 mortar boats with 13" mortars. April 17, 1982 saw Porter moving up the river to get into position, 15 boats began shelling Fort Jackson, the other 6 taking on Fort St. Philip. Wooden buildings in the forts burned, counter battery fire sank some mortar boats, but the fort defenders couldn't prevent a couple of Farragut's gunboats breaching the river barrier enough for the bigger ships in Farragut's force to get upriver. This happened on on April 20. Eventually, on April 24, 1862, Farragut's main force began to drive toward New Orleans, ships' guns blazing away at the forts and the Confederate monitor trying to 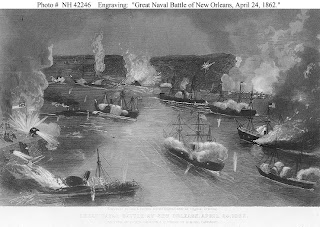 ram them and the uncompleted ship Louisiana which was being used as a firing platform. The action was fast and furious for those times:

Farragut divided his fleet into three divisions for the dash past the forts. He had to be talked out of leading the first division himself, and eventually agreed to lead the second division, which contained his three heaviest ships. The fleet began to move at 2 a.m. on 24 April. The first ship of the first division came under fire at 3.15 a.m. At the same time part of the mortar fleet opened a new bombardment on Fort Jackson, preventing that fort from doing much damage during the upcoming battle. The lead division was soon past both forts, and engaged with the Confederate fleet. By the time Farragut had got past Fort St. Philip, the battle between the fleets was almost over. Farragut’s division devoted some time to attacking Fort St. Philip, with the intention of knocking her guns out of action at least for long enough for the third division to get past safely. After succeeding in this, Farragut passed on beyond the forts. At this point he came closest to disaster. 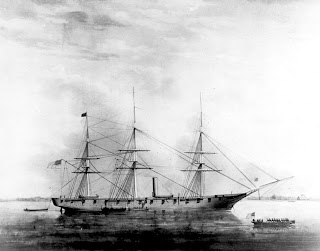 A Confederate fire-raft, filling, amongst other things, with burning pine cones, was being guided towards the Hartford by a tug. In her attempts to avoid the fire-raft, the Hartford 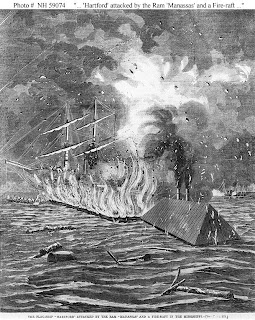 ran aground. The fire-raft found her target and the Hartford was soon on fire. After a short period when it looked like the flagship might have to be abandoned, the fire was extinguished; she was backed off the shoal, and continued up the river. Most ships of the third division got past the badly damaged Confederate forts without any problems. Three of the slowest found themselves stuck below the forts at daylight, and had to beat a hasty retreat under fire from the remaining guns in the two forts. Above the forts the biggest threat was posed by the ram Manassas. First she hit the Mississippi, but without inflicting much damage. She then attempted to ram the Pensacola, but that ship managed to avoid the collision. After that the Manassas attempted to pass between the forts to attack the mortar fleet, but was fired on by her own side, and forced to turn back. Her next target was the Brooklyn. She found 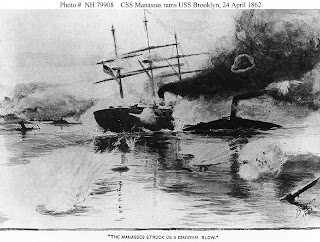 her target, inflicting a blow that might have been very serious if it had not hit the Brooklyn’s full coal bunker (although her captain remained convinced that he had actually hit the Hartford). During the only gun on the Manassas was put out of action. This marked the end of her career. She was now downstream of the Union fleet, and could not make enough speed against the current to successfully ram her opponents. With the river behind her blocked by the guns of the Confederate forts, her captain had no choice but to run her aground and abandon ship. Once aground, she was set alight by Union gunfire, floated down the river, and exploded.

Having forced the barriers, the Union ships proceeded to New Orleans where they overcame the few remaining defenses. Confederate forces surrendered on 1 May 08. The lower Mississippi was in Union hands.

Today, the battle is not as well remembered as other fights but two of our modern destroyers bear the names of the famed naval commanders who carried the day, USS Farragut (DDG-99) and USS Porter (DDG-78) (Porter is named for father and son naval leaders) 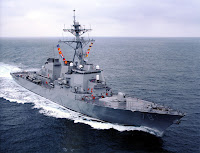 Give a salute to the brave men who took on the river and won through to lead the Union to victory and to the out manned defenders who did their best to stop them.
Posted by Mark Tempest at 5/04/2008 09:38:00 PM