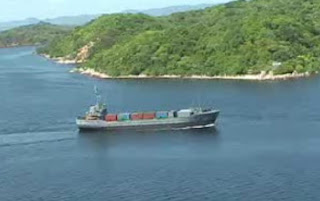 Posted here on a Tiger-flavored (and barely credible) blog:

Frog men of the Liberation Tamil Tigers delivered a major blow to the supply ships of the Sri Lanka navy. A-520, named ‘MV Invincible’, that allegedly carried supplies such as food, and medicine and other essential supplies to the East coast was sunk out in the Eelam waters (Trincomlaee) at 2.33 last Saturday.

According to available sources the ship was carrying nuclear missiles, Chemical and Biological weapons purchased by GoSL from Slovakia according to the officials in a 6ft deep underground bunker in Vanni. Officials strongly deny the ship was empty citing Satellite and state of the art Tamil Eelam Airways (TEA) reconnaissance intelligence.

More on the sinking here:

A Naval logistics vessel was blasted and sunk by suspected Tamil Tiger rebels in Sri Lanka's eastern port of Trincomalee early Saturday, hours before the local elections, said the military.

Navy Spokesman D. K. P. Dassanayake said a cargo vessel named A520 was damaged and sank in an underwater explosion at Trincomaleeharbor, about 270 km northeast of the capital Colombo, around 2.15a.m. (2045 GMT Friday).

Dassanayake said there was no direct evidence to show it was carried out by the rebel Liberation Tigers of Tamil Eelam (LTTE), "but in Sri Lanka no other organizations would make this kind of attack."

Dassanayake said the vessel was berthed at the Ashroff Jetty at the time of the incident and had only a skeleton crew on board for routine operational purposes.

The crew suffered no casualties and no other properties were damaged due to the explosion, the spokesman said.

Pro-LTTE sources said the naval ship was sunk by the sea wing of the LTTE when the vessel was loaded with explosives to be transported to K. K. S. Harbor in the northern Jaffna peninsula.