One Way to Make Sure the U.S. Navy Will NOT Be Making Friendship Visits

Jane Novak reports All the USS Cole Bombers Free in Yemen, Journalist on Trial for Terrorism:

In October 12, 2000, two suicide bombers on an explosives laden dingy attacked a US destroyer in the Gulf of Aden, killing 17 US service members and injuring 49 others. The perpetrators of this terror plot are all free in Yemen despite being found guilty in court and sentenced to jail. 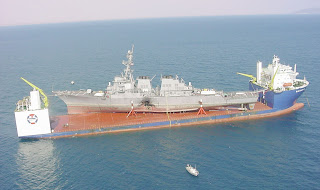 If Saudi Arabia pardoned 9/11 highjacker Mohammed Atta while imprisoning a completely innocent journalist on terrorism charges, the US would be in an uproar. But that’s exactly what is going on in Yemen. The USS Cole bombers are free. My good friend, the journalist al-Khaiwani, is on trial in terrorism court. Sentencing is May 21.

Perhaps the Yemenis are following the U.S. election returns and are betting that their neighbors are more important than a country that seems to headed to abandoning our allies in the midst of a war.

I would suggest boycotting the products of Yemen, but I'm not sure we import much. The CIA says we take 6.7% of their exports. China's the big player. Of course, oil and gas come into play:

Following a minor discovery in the south in 1982, an American company found an oil basin near Marib in 1984. A total of 170,000 barrels per day were produced there in 1995. A small oil refinery began operations near Marib in 1986. A Soviet discovery in the southern governorate of Shabwa proved only marginally successful even when taken over by a different group. A Western consortium began exporting oil from Masila in the Hadramaut in 1993, and production there reached 420,000 barrels per day in 1999. More than a dozen other companies have been unsuccessful in finding commercial quantities of oil. There are new finds in the Jannah (formerly known as the Joint Oil Exploration Area) and east Shabwah blocks.

In November 2005, Hunt Oil’s 20-year contract for the management of Block 18 fields ended. Despite agreement with the Government of Yemen on a 5-year extension, the Republic of Yemen Government abrogated the agreement via a parliamentary vote (not called for in the contract). The company formally requested arbitration proceedings at the International Chamber of Commerce in Paris in November. No decision has been rendered.

Yemen's oil exports in 1995 earned about $1 billion. By 2005, exports had grown to approximately $3.1 billion and comprised roughly 70% of government revenue. Oil production is expected to decline in 2007 due to dwindling reserves, but revenue will be stable as long as oil prices remain high.

Oil located near Marib contains associated natural gas. Proven reserves of 10-13 trillion cubic feet could sustain a liquefied natural gas (LNG) export project. A long-term prospect for the petroleum industry in Yemen is a proposed liquefied natural gas project (Yemen LNG), which plans to process and export Yemen's 17 trillion cubic feet of proven associated and natural gas reserves. In September 1995, the Yemeni Government signed an agreement that designated Total of France to be the lead company for an LNG project, and, in January 1997, agreed to include Hunt Oil, Exxon, and Yukong of South Korea as partners in the Yemeni Exploration and Production Company. The project envisions a $3.5 billion investment over 25 years, producing approximately 3.1 million tons of LNG annually. A Bechtel-Technip joint venture also conducted a preliminary engineering study for LNG production/development. In 2005, Yemen LNG signed two agreements for the sale of 4.5 metric tons per year, the majority of which will be exported to the United States and South Korea. Construction on the LNG export facility began in September 2005, and it is expected to begin exporting in 2009.