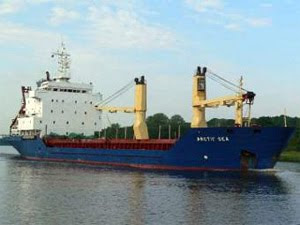 A Russian journalist leaves Russia after breaking a story about the MV Arctic Sea (click on MV Arctic Sea label below for all posts on the ship):

A journalist who broke the story of a Russian cargo ship apparently hijacked by pirates announced he had fled Russia, fearing for his life.

Mikhail Voitenko, editor of the online maritime bulletin Sovfracht, said he had left the country after receiving a menacing late-night phone call. Voitenko said an unidentified man called him on the night of 1 September and warned him he was "stepping on the heels of some serious people".

Speaking from Istanbul, where he is now in hiding, Voitenko said he was bluntly informed that these "guys are out for revenge. I was told: 'They are very unhappy with you. But they don't want unpleasantness'." Voitenko said the man urged him to leave Russia as rapidly as possible.

His trouble, of course, stems from his assertion that the Arctic Sea was carrying weapons as noted by the BBC:

A journalist has fled Russia after suggesting the Arctic Sea cargo ship that was apparently hijacked in July may have been carrying illegal weapons.
***
Mr Voitenko - who was among the first to cast doubt on official explanations about the ship's disappearance - told the BBC it was nonsense to suggest pirates had been involved.

Eight men have been charged with hijacking and piracy over the case
Instead he suggested the ship may have been carrying a secret shipment of weapons as part of a private business deal by state officials.

This was also covered in the BBC Newshour radio broadcast, the entirety of which can be found here. The suggestion that Israel was involved in the ship's hijacking get mentioned in that report.