The German navy shot dead a suspected pirate off the coast of Somalia yesterday after a boat carrying five men failed to heed warning shots, the German military said. 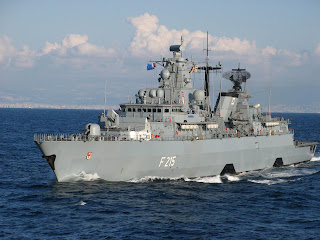 “After an exchange of fire, one of the men on the boat was critically wounded and died despite immediate medical treatment,” a statement said.

The suspected pirates threw weapons overboard after the exchange and officials are now inspecting their boat, the statement added.

The German frigate involved - the Brandenburg - was participating in the European Union’s Atalanta mission in the lawless Gulf of Aden waters off Somalia.
***
Somali pirates holding a Turkish bulk carrier for nearly two months have demanded $20mn for the release of the vessel and its 23-man Turkish crew, a company lawyer said yesterday.

“The ransom they asked for is $20mn, but negotiations on kidnappings such as these usually end with agreement on 10 to 20% of the amount asked,” Nilgun Yamaner, who represents the owner of the ship, said.

“In our case, that amounts to a figure between 2 to 4mn,” she added.

Yamaner said she believed they were close to a deal with the pirates, but refused to say the figure her client, the Istanbul-based Horizon Shipping, was negotiating for the ship.

Finally, a couple of Spanish fishing trawlers operating in the Indian Ocean seem to have escaped a pirate attack, as set out here:

The "Campo Libre Alai" escaped an attack Monday and the "Alakrana" avoided capture on Thursday, said Pilar Unzalu, a fishing official in the government of the Basque region where both tuna trawlers are based, the Europa Press and Vasco Press news agencies reported.