U.S. Navy personnel are on scene, lending their hands: 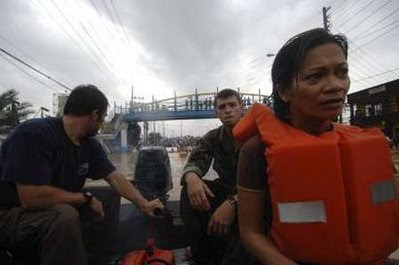 U.S. sailors from the Joint Special Operations Task Force-Philippines take part in a relief mission for flood victims in Manila September 27, 2009. The Philippines appealed for international aid to help tens of thousands marooned by flashfloods, and apologised for the delays in rescue efforts to avoid potential political fallout from the crisis. Disaster officials said the death toll from Typhoon Ketsana that hit the main island of Luzon stood at 52 on Sunday and more than 20 others were missing feared dead. Picture taken September 27, 2009. REUTERS/U.S. Navy/Petty Officer 2nd Class William Ramsey/Handout 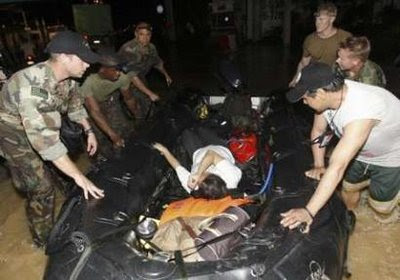 Members of the U.S. Navy evacuate a pregnant woman from her flooded house brought on by Typhoon Ketsana, known locally as "Ondoy" in Pasig city east of Manila September 28, 2009. Philippine officials scampered to send relief aid on Monday to hundreds of thousands hit by weekend floods in and around Manila, while anger mounted over what was seen as an inadequate response from the government. Picture taken September 28, 2009.