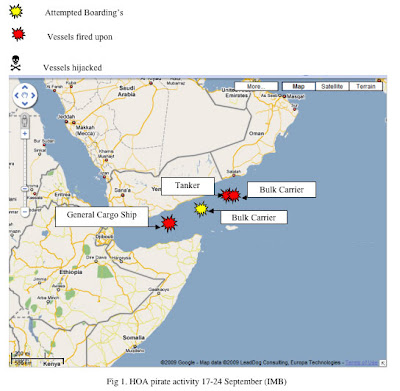 GULF OF ADEN: General cargo ship (BBC PORTUGAL) fired upon 20 Sep 09 at 1545 local time while underway in position 12:49.48N – 048:11.82E. One speed boat with seven armed men onboard approached the vessel. The master activated counter-piracy measures, and an armed security team onboard exchanged gunfire with the men in the speedboat. The speedboat aborted its attack headed towards the Yemeni coast. An Australian warship responded to the call and boarded the speedboat, confiscating their weapons before releasing them (Operator, IMB, AFP).

2. GULF OF ADEN: Bulk carrier fired upon 19 Sep 09 at 0605 UTC while underway in position 13:52N – 051:07E. Approximately seven armed men in a six meter long, white colored skiff fired upon the vessel. They attempted to board the vessel but were unable to do so due to the evasive maneuvers and counter-piracy measures taken by the crew. The master contacted coalition forces for assistance. The men aborted the attempt upon seeing a coalition helicopter arriving at the scene. No injuries to the crew were reported (IMB).

Tanker fired upon 19 Sep 09 at 0550 UTC while underway in position 13:52.10N – 051:04.17E. Four men armed with machine guns in a six meter long, white colored skiff, fired upon the vessel. The master raised the alarm, increased speed, took evasive maneuvers, informed ships in the vicinity and contacted coalition warships for assistance. The crew mustered and activated counter-piracy measures. A coalition helicopter arrived and the men in the skiff aborted the attack. No injuries to the crew were reported (IMB).

1. GULF OF ADEN: Bulk carrier reported attempted boarding 19 Sep 09 at 0600 UTC while underway in position 13:54.2N – 051:09.8E. Approximately six armed men in a white colored speedboat attempted to attack the vessel while it was underway with a convoy of two other vessels. The master altered course and contacted coalition warships for assistance while the crew activated counter-piracy measures. The speedboat chased the vessel for 20 minutes and aborted the attempt upon arrival of a coalition helicopter (IMB).

G. WEST AFRICA:
.
1. NIGERIA: Vessel boarded 21 Sep 09 while underway outside Lagos port. Nine robbers in two boats came close to the astern of the vessel. One of the robbers managed to get onto the stern ramp recess. The crew spotted the robbers and shouted at them. Upon seeing the crew alertness, the robbers aborted their attempt and moved away (IMB).
.
2. NIGERIA: Cargo ship robbed 20 Sep 09 at 0815 local time while underway in position 03:59N - 006:46E, Bonny River. Six armed men boarded the vessel, stealing ship's stores and cash. They ransacked the crew cabins, stole personal belongings and left the vessel after approximately one hour. No injuries to the crew were reported (IMB).
.
3. NIGERIA: Tanker robbed 6 Sep 09 at 2130 UTC while at berth in Koko port, western Niger Delta. After discharging operations, approximately 50 robbers boarded the vessel from the jetty. They attempted to steal the remaining palm oil from the vessel, but the crew managed to prevent it. The robbers were very aggressive, and the crew was forced to take shelter in the superstructure. Attempts to contact authorities were unsuccessful. The robbers stole ship's stores and then escaped (IMB).
.
4. NIGERIA: Vessel fired upon 15 Sep 09 at 1315 local time while operating near the Oron Jacket platform in the Oron field. Approximately 12 armed men in two long boats approached the vessel. The captain succeeded in contacting security vessels, who responded by exchanging gunfire with the armed robbers. The two boats eventually fled the scene. No further information was reported (Risk Intelligence/MaRisk).
.
5. NIGERIA: Tug briefly hijacked, vessel robbed 7 Sep 09 at 0600 UTC in position
03:53.50N - 006:47.50E, approximately 30NM from Port Harcourt. Nine men armed with automatic weapons in a speedboat boarded and hijacked an offshore tug. They then used the tug to board another vessel in the vicinity. They robbed crew members of personal belongings and then left both vessels after approximately 40 minutes (IMB).