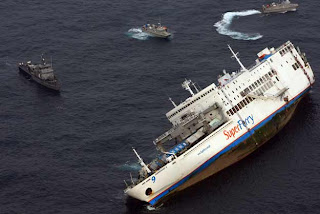 An inter-island ferry in the Philippines turns turtle, about 900 survive and some dead - as reported in SuperFerry sinks off Zambo Norte coast:

As dawn broke in waters off the Zamboanga peninsula on a clear day, the SuperFerry 9 had capsized, according to officials, leaving at least twelve people dead in the panic and scramble for the exits.

Coast Guard chief Adm. Wilfredo Tamayo said that as of 9 p.m. Sunday night, 926 survivors had been rescued—some of them on life rafts—by two commercial ships and several Philippine Navy vessels and taken to Zamboanga City.

A search was under way for more than 30 people who remained missing, Tamayo said, adding that they may have drifted with their life jackets or have been rescued but were not yet listed as survivors.

“We really hope they’re just unaccounted for due to the confusion,” Tamayo said.

The US military station in Zamboanga City conducting antiterrorist training dispatched a support vessel with a medical team to help in the search.