Australian Navy breaks up a Somali pirate ship hunt, as set out here:

Australian sailors from the warship HMAS Toowoomba have thwarted a pirate attack in the Gulf of Aden, boarding a suspect vessel and seizing a cache of military weapons. 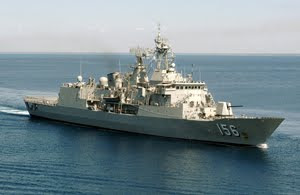 ***
The incident occurred late on Sunday night after Toowoomba, an Anzac class frigate, received an emergency call from the freighter MV BBC Portugal, reporting a boat carrying an armed group was approaching at high speed.
***
As Toowoomba sailed at top speed towards BBC Portugal, coalition P-3 Orion maritime surveillance aircraft and a naval helicopter from another coalition warship spotted the suspect vessel.

They confirmed sighting weapons on the vessel and also that the crew had disposed of a number of items overboard, including a ladder.

On reaching the scene, Toowoomba launched her boarding team to investigate. 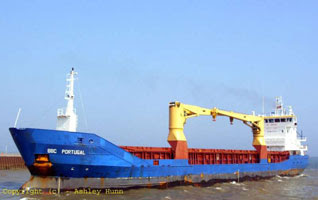 A search of the vessel revealed a rocket-propelled grenade launcher (RPG), six AK-47 assault rifles, a G-3 assault rifle and a large quantity of ammunition.

UPDATE: There's more to the story than is reported above. Gulf of Aden Group Transits reports that there was a Yemeni Navy team on BBC Portugal and sends along this:

Late afternoon of Sunday 20th of September, a Bulk Carrier reported an approach of a skiff while in the Internationally Recommended Transit Corridor in the Gulf of Aden. On board of the Bulk Carrier a unit of the Yemeni Navy was embarked. On sighting of these military personnel the skiff abandoned the approach and tried to flee as reported by the merchant vessel to the UK Maritime Trade Organization in Bahrain. UKMTO alerted other merchant vessels and the Counter Piracy Forces on MERCURY, the EU introduced common counter piracy communication system.

Thereupon a Japanese P3 reconnaissance aircraft, already on site, reported position information to other Counter Piracy forces. The Australian warship Toowoomba of CTF 151, closest to the skiff, was assisted by the helicopter of the German EU NAVFOR warship FGS Bremen in stopping the fleeing skiff. On sighting of the helicopter unknown items and a ladder were thrown over the bow of the skiff and all eight persons on the skiff raised their arms awaiting the boarding team of HMAS Toowoomba. During the boarding all piracy related paraphernalia were seized and destroyed. The helicopter of FGS Bremen continued to secure the area from the air.

This is just one example of the excellent coordination and cooperation between the Counter Piracy Task Forces active in the Gulf of Aden. The use of the common communication system MERCURY proved its utility again.

FGS Bremen takes part in the EU NAVFOR mission Operation ATALANTA. The main tasks of Operation ATALANTA are to escort merchant vessels carrying food of the ‘World Food Program’ (WFP), the protection of vulnerable ships in the Gulf of Aden and Indian Ocean and to deter and disrupt piracy.

We had placed an armed Yemen Navy team on the vessel and it is they who fired warning shots to the pirates to ward them off whilst we called for coalition assets to assist to which a multinational scenario played out involving the German, Australian and Japanese Navy who all supplied assets to the cause.

However the underlying fact is that the embarked Yemen Navy team thwarted the attack – NOT the Australians.....

(end Update) M/V BBC Portugal Photo Copyright by Ashley Hunn, from Shipspotting.com and is used in accordance with terms set forth therein.

A Korean naval unit has rescued three foreign vessels from being hijacked by pirates operating off the coast of Yemen as part of a U.S.-led anti-piracy campaign, Yonhap News reported Sunday. 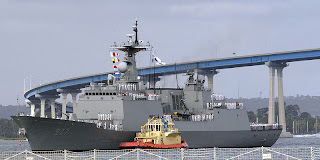 The Dae Jo Yeong, a destroyer with the South Korean naval unit Cheonghae, Sunday rescued three ships registered under Cyprus, the Marshal Islands and the Bahamas from pirates near waters off Yemen at 3:13 p.m. on Saturday, military officials here said.
***
The unit, which rescued five Yemeni sailors captured by the pirates the previous day, has so far successfully intervened in nine separate pirate raids.

Naval officials said they released the pirates, who had used a boat registered to Yemen as their mode of transportation, due to the difficulties involved in processing and bringing legal charges against them.

How the international warships off Somalia talk even if they aren't good friends, explained here by StrategyPage:

So the British took the initiative of establishing a "neutral" communications channel for all the warships on anti-piracy patrol. This is a secure Internet based communication system called Mercury. All the ships engaged in counter-piracy operations have access to Mercury. This makes it possible for ships to request information, or cooperation, from other ships, despite whatever currently icy diplomatic conditions may exist between the two nations involved. Thus the Iranian warships can discretely work together with U.S. warships.

Increased naval patrols in the Straits of Malacca have forced pirates in Asia to move their operations to the South China Sea, where the number of attacks on ships is at a five-year high, an official said Tuesday.

At least 10 ships were attacked in the South China Sea so far this year, the latest on Saturday when six pirates boarded a Singapore-registered liquefied petroleum gas tanker, said Amy Fang of the Regional Cooperation Agreement on Combating Piracy and Armed Robbery against Ships in Asia, or ReCAAP.

The attackers assaulted the duty officer and robbed the ship's crew, Fang said.

She said it was "worrying" that 10 attacks have taken place with more than three months still to go this year, compared to nine attacks in 2005 in South China Sea.

"The pirates seem to have more heavy weapons" than before, and are attacking ships rather than just threaten the crew, Fang told The Associated Press from the Singapore base of ReCAAP, an information-sharing group sponsored by 17 countries in the region to fight piracy.

One such attack, reported by ReCAAP (arrow points to general area of attack): 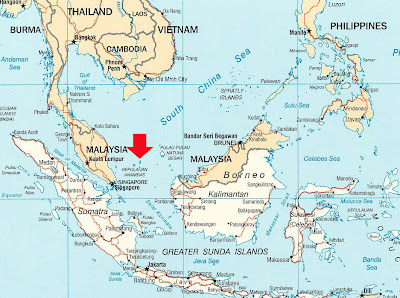