A Week's Worth of Piracy 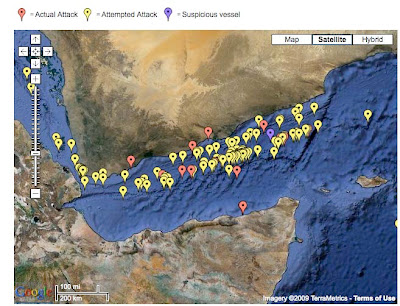 Reported piracy efforts from the ICC-CCS. Gulf of Aden (Somali pirates) in red:

28.09.2009: 2030 LT: Posn: 22:14.2N – 091:44.2E, Chittagong anchorage, Bangladesh.
Eight robbers in a fishing boat attempted to board a bulk carrier at anchor. Duty AB spotted them and raised alarm. Seeing the alert crew the robbers jumped overboard and escaped. Nothing stolen.

27.09.2009: 1600 UTC: Posn: 22:15.4N – 091:43.5E: Chittagong anchorage: Bangladesh.
Duty officer onboard a container ship arrived at poop deck and spotted one robber near entrance to rope store. When duty officer approached the robber two other robbers armed with long knives began to chase him. He retreated to the main deck and alerted other crew members. Crew with crow bars arrived at poop deck but by then the robbers jumped overboard and escaped with stolen ropes.

27.09.2009: 0002 LT: Posn: 22:11.22N – 091:43.24E, Chittagong anchorage ‘B’, Bangladesh.
Eight robbers armed with long knives in a small wooden fishing boat boarded a product tanker at anchor. Duty bosun sighted them and informed OOW who raised the alarm. Robbers threatened one watchman with long knives, cut off some mooring ropes and jumped into the water and escaped with the stolen stores. Port control informed.

26.09.2009: 0120 UTC: Posn: 13:11.57N – 049:25.11E, Gulf of Aden.
Eight pirates armed with guns in two high powered speed boats attempted to board a bulk carrier underway. Master raised alarm, took evasive manoeuvres, fired parachute signals, activated SSAS and contacted coalition warships for assistance. Sea water kept running on deck constantly and crew locked themselves in bridge. Pirates started firing at the bridge and a coalition warship advised that they were getting closer to the ship. Pirates aborted the attempt upon seeing the warship. A coalition helicopter carried out inspection outside the ship’s superstructure along every deck and confirmed no pirates onboard. Ship resume course.

26.09.2009: 0800 UTC: Posn: 12:15N – 045:39E, Gulf of Aden.
Pirates in a skiff chased a bulk carrier underway. Master carried out evasive manoeuvres, increased speed and informed coalition warships. A coalition warship and a helicopter intervention prevented the pirates to continue the attempt. No injuries to crew and no damage to ship. (More info: The vessel in the above incident has been identified as the Panamax Peppou, a Panamanian-flagged 61,500 dwt bulk carrier. A Saudi Arabian warship dispatched a helicopter to avert the attack. The vessel is owned by Greece’s Chian Spirit Maritime Enterprises.)

19.09.2009: 2230 LT: Posn: 03:00N – 105:14E, Off Pulau Mangkai, South China Sea.
Eight pirates armed with long knives and crowbars boarded a bulk carrier underway. They broke into 2/O cabin, tied up his hands and threatened him with a long knife at his throat. Pirates forced the 2/O to call the master. While the pirates were waiting next to the master’s door, they seized C/E and tied up his hands. The pirates rushed inside the Master’s cabin once it was opened. They threatened the Master with long knives and crowbars and demanded money. Master’s hands were tied up and they forced him to the aft station. The pirates jumped into a long wooden skiff with ship’s cash and crew personal belongings and escaped. C/E and 2/O managed to free themselves and raised the alarm. No injuries to crew.

22.09.2009: 1555 UTC: Posn: 22:14.6N – 091:43.0E: Chittagong anchorage: Bangladesh.
Five armed robbers boarded a bulk carrier at anchor via the stern. Duty seaman doing routine rounds sensed suspicious activities astern and went to investigate. He encountered robbers and was threatened with knives but managed to escape. Alarm raised and crew mustered. Robbers escaped by jumping into the water. Upon investigation, it was discovered robbers managed to enter into the steering flat. Ship stores stolen.

Turkey's military says navy commandos aboard a frigate have captured seven pirates in the Gulf of Aden off Somalia's coast.

The military says the commandos aboard the TCG Gediz raided the skiff early Saturday following a request to block it before it could attack two ships bearing the flag of Panama. 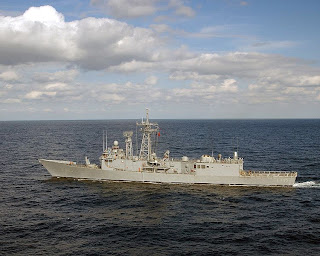 A statement on the military's Web site says a navy helicopter aboard the frigate also took part in the operation.

The Turkish frigate is in the area as part of a NATO force patrolling the seas.

SEVEN suspected pirates were arrested off the coast of Somalia on Saturday after attacks on two separate Panama-flagged merchant vessels that appear to have been the work of the same gang, reports from the region indicate.

Both attacks took place at roughly the same location, around 60 miles from shore in the Internationally Recommended Transit Corridor. 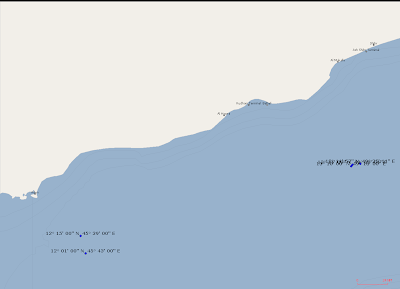 With 30 or so warships in the area and many helicopters at work, coupled with barbed wire on ships and other self-defense measures by the merchant ship, the pirates' work is getting harder.

UPDATE: Speaking of the Turkish capture of seven pirates, Saturn 5 has good coverage here including photos of the capture: 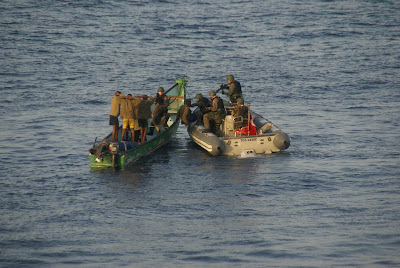