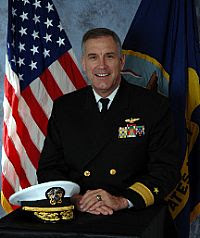 David Axe, Daniel Sekulich, Galrahn, Boston Maggie and more bloggers ask questions of the Commander and Chief of Staff of CTF-151 currently on station in the Gulf of Aden aboard USS Anzio. As the speakers note, things are currently calm.

The roundtable lasted about 40 minutes.

However, as was not discussed, the monsoon winds are ending and calmer, more pirate friendly seas.

I wish them great success in piracy prevention. 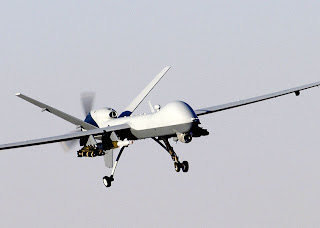 If you are wondering about my question about "drones" (UAVs) in the Seychelles, see here where the Voice of America reports about an Africom plan:

The United States is planning to deploy unmanned aerial vehicles in the Seychelles islands in the coming weeks to combat piracy. The use of land-based drones is a new approach to deter ship hijackings in the region.

The spokesman for the U.S. military's Africa Command, Vince Crawley, says several Reaper unmanned aerial vehicles will be in the Seychelles by late October or November. He says they will be used to conduct intelligence, surveillance, and reconnaissance missions throughout the Indian Ocean region.

Might be a good idea to liaise with CTF-151, NATO and the EU.

It should be noted that the Admiral did refer to the use of maritime patrol aircraft for potential pirate spotting. Such recon may be very useful in diverting naval forces to suspected pirate locations.

Japan is providing such MPA to the area, as set out here:

JAPAN has responded to calls from commercial shipping for more maritime patrol aircraft to beef up the international fight against piracy off Somalia.

Lloyd’s List this week reported that leading shipping bodies — BIMCO, Intertanko and the International Chamber of Shipping — want more specialist aircraft in the region to hunt down and deter pirates. 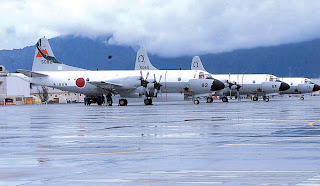 A Defence Ministry spokesman told Reuters that at least two maritime patrol aircraft will leave for a base in Djibouti on the border with Somalia, together with 150 crew and support personnel.

The Japan Maritime Self-Defence Force runs more than 100 of the P-3C Orion aircraft, the second largest fleet of these MPAs after the US.

United Nations and International Maritime Organization meetings have discussed the deployment of P-3Cs, which have a maximum speed of more than 400 knots and a range of 5,600 miles, to assist the naval coalition combat piracy.

Maritime security specialists believe that just 18 MPAs would significantly boost the fight against piracy, potentially covering large areas of water from bases such as Djibouti, Mogadishu and Diego Garcia.

Spain has already deployed at least one P-3C to Djibouti, with the aircraft helping naval forces hunt down pirate motherships.

UPDATE2: With a hat tip to Maggie a report on a meeting of SHADE:

A meeting of the Shared Awareness and Deconfliction (SHADE) group was held in Bahrain Aug. 11.

The meeting, attended by 23 nations including China, Russia, India, Egypt and members of Combined Maritime Forces (CMF), NATO, the European Union (EU), United Kingdom Maritime Trade Organisation, Maritime Liaison Office and International Association of Independent Tanker Owners representing industry, resulted in a number of agreements which will help coordinate efforts of the international community to combat piracy off the coast of Somalia.

Chaired jointly by CMF and the EU, this meeting provided a working-level opportunity for nations and organizations to come together to ensure the effective coordination and deconfliction of military resources and counterpiracy efforts off the coast of Somalia.

"These meetings are critical to the effective use of all counterpiracy efforts in the region," said Royal Navy Commodore Tim Lowe, deputy commander, CMF. "With the weather improving in the area, attacks on shipping are expected to increase, but as a result of today's and previous meetings the multinational forces will be better prepared to deter and disrupt acts of piracy off the coast of Somalia."

As more nations deploy maritime forces to the region, working-level meetings like SHADE serve as a forum for the sharing of lessons learned and best practices among all naval forces providing support to counterpiracy operations.