Naturally, it all began before 1944. It actually goes back over 60 years earlier to 1884, when the foundation for television was laid by Paul Nipkow, a German graduate student, to 1897 with the invention of the Cathode Ray Tube by the English inventor J.J. Thomson, to 1907 Russia where Rosing started developing television, to Swinton developing CRT to CRT circuits in 1908, to Vladimir Zworykin inventing the kinescope (for the first television we would recognize today). The Russian Revolution led to Zworykin emigrating to the U.S. and joining the Radio Corporation of America where he honed televison. Others were also working on television, including Philo Farnsworth who demonstrated a form of television to the Navy in 1933. Though for technical reasons, Zworykin's RCA system was deemed better for military purposes (see here, from Television: the life story of a technology by Alexander B. Magoun. 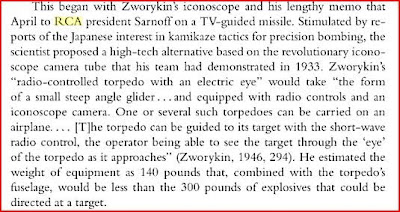 The drones were used for other tests, including using the lighter weight television cameras and transmitters (from Unmanned aviation: a brief history of unmanned aerial vehicles by Laurence R. Newcome, p.67:

The success of the tests pushed the drones into production (from Newcome p.68): 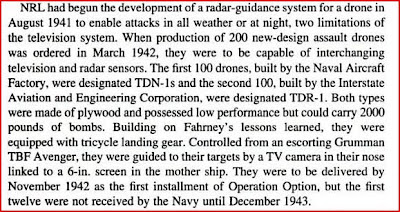 By April 1942, the project had performed a successful torpedo attack using an assault drone. Films of the exercise provoked high interest among the senior brass and civilian leadership, with OPTION raised in priority and plans to build 5,000 assault drones for deployment with 18 drone squadrons. One of the consequences of this good fortune for the drone program, however, was that critics began to hammer on the effort as a waste of resources.

Farnhey countered by directing the development of a low-cost assault drone, the "TDN-1", which was constructed by the US Naval Aircraft Factory and was built mostly of wood. The "TD" 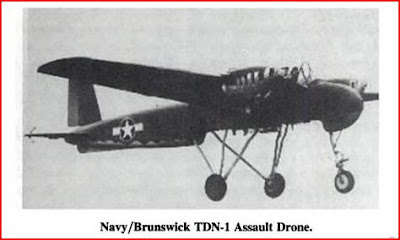 stood for "Torpedo Drone", of course, while the "N" was a code for the Naval Aircraft Factory. The TDN-1 featured a high wing, twin small piston engines, and fixed tricycle landing gear. It could carry a torpedo or 900 kilogram (2,000 pound) bomb nested under its fuselage, at a cruising speed of 280 KPH (175 MPH). A conventional cockpit could be swapped out for the TV control system for tests or ferrying. Only about 114 TDN-1s were built. The design was not well-suited for mass production and the TDN-1s ended up being used for evaluation and as targets.

Official enthusiasm for the assault drone concept began to fade, but Smith and Farnhey were moving ahead on a production assault drone, the "TDR-1", built by

Interstate Aircraft Company of Los Angeles -- the "R" code in the drone designation was for Interstate Aircraft. The TDR-1's general configuration was much like that of the TDN-1 but it was much more practical to build, with a frame of steel tubing covered by molded wood. The frame was provided by the Schwinn bicycle company and the subcontractors for the woodwork included manufacturers of musical instruments. The two machines were externally similar, but easily told apart because the TDN-1 had a high-mounted wing and the TDR-1 had a low-mounted wing.

The TDR-1 was powered by twin Lycoming flat-six air-cooled piston engines. Like the TDN-1, it could be piloted, and it was said to be very pleasant to fly, though not all that fast. The fixed landing gear could be ejected when the aircraft was on an attack run. However, the program was still on increasingly uncertain political ground, and it took intense lobbying by Smith and Farnhey to obtain approval for deployment of their "Special Task Air Group 1 (STAG-1)", which departed for the South Pacific in mid-May 1944. 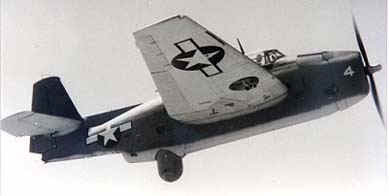 The TDR-1s were controlled by Grumman Avenger torpedo bombers, modified to carry control systems and designated "TBM-1C". The radio control and TV reception antennas were carried in a retractable antenna dome in the Avenger's rear belly. The control system in the aircraft included a joystick and a remote control for the TDR-1's autopilot system. The autopilot remote control used, of a things, a telephone dial, with the appropriate autopilot control code set by just dialing a single digit -- one to drop a torpedo, one to arm a bomb, and so on. However, the control system only had four channels and so it was only possible to fly four TDR-1s at a time in the same attack.

Before deployment the Navy culled officers and men from the fleet after extensive training, a group of Navy personnel began operations using this new and very secret weapon:

It was like something out of Flash Gordon to the sailors involved in a top-secret, World War II Naval air project: Remote-controlled aircraft loaded with bombs, guided from a control plane as far as 50 miles away.
They were controlled with joysticks and video cameras and televisions, long before the public had even heard of such things. American kamikazes, without sacrificing pilots as the Japanese did.
How secret was the project? It operated out of Traverse City for months without the community ever knowing.
***
The idea of remote-control or "drone" aircraft had its roots as far back as 1936, when the Navy began experimenting with the concept. The idea was simple: to soften entrenched enemy targets without incurring casualties.
Two STAG groups were formed by SATFOR in 1943, as some of the Navy's best pilots, radio and electronics men were selected for the top-secret project. They went to remote Clinton, Okla., to begin training.
Project members eventually developed a working drone aircraft, a sleek, twin-engine, low-wing bomber made of laminated plywood. The craft was manufactured by the Wurlitzer company in Illinois, known for its organs and pianos, as the company was converted to supplying the U.S. war effort like so many factories during World War II.
Loaded with radio control equipment - and a one-ton bomb - the drone would take off in tandem with a control plane. Behind the pilot of the control plane would sit the drone controller, hunched over a six-inch television screen receiving a video feed from a camera mounted in the nose of the drone. Using a joystick, the drone controller could manipulate the drone aircraft to enemy targets.

Once trained, that group was given (barely) a chance to prove the concept in combat - in the Solomons (from:here)

The first attack was conducted on 30 July, on a derelict Japanese freighter, the YAMAZAKI MARU, that had grounded itself near Cape Esperance on Guadalcanal Island in the Solomons. Six TDR-1s, with four intended for the attack and two as backups, were committed to the mission, all armed with 900 kilogram (2,000 pound) bombs. Two cracked up on takeoff, two performed attacks that were frustrated by dud bombs, but two went off with very impressive bangs. It made for great film footage, but by that time the effort's standing was so low that Smith had to lobby very hard just to keep the program from being immediately canceled.

Beginning on 27 September 1944, STAG-1 conducted a series of attacks on Japanese installations on the island of Bougainville. When the attacks ended on 26 October 1944, STAG-1 had expended 46 TDR-1s in combat, with 37 performing attacks and at least 21 hitting their target. The Japanese found the attacks startling, believing that the Americans had taken up suicide attacks.

The end score seemed encouraging, but it wasn't enough to stave off cancellation. The TBM-1Cs were dumped into the ocean to dispose of them and the personnel reassigned to other duties. It was a bitter pill to swallow for the program's officers and men, but by that time the war was clearly going to be won by other weapons and the TDR-1 was no longer seen as particularly relevant. Apparently some further work was done a "TDR-3" that featured radial engines, but though a picture of such a machine survives, it may have been a mockup, and it's unclear if it ever actually flew.

It is also unclear in hindsight if killing off the TDR-1 was the wrong decision. The TDR-1 had some potential, but the television system was very crude, with poor contrast and resolution. It was only adequate for picking out large distinct targets in relatively bright daylight conditions, and the complexity of the bulky electronics suggested that keeping things working in rough field conditions would be troublesome. The video link back from a drone was also easily jammed; the Allies had quickly developed jammers to neutralize German radio-guided glide bombs, and there was nothing to prevent the Axis powers from developing simple jammers of their own to neutralize the assault drones.

Later, of course, improvements in television technology coupled with experience in remote control operations allowed the development of other weapons, missiles and UAVs which are related to the early days of STAG-1, the TDR-1 and LCDR Delbert S. Fehney, later RADM Delbert S. Fehney, the "father of Navy guided missiles."

An excellent website devoted to the STAG-1 group can be accessed here. I have borrowed a couple of snapshots taken of the video feed to the TBM-1C's.

See also Evanflys.com from which some pictures have been borrowed.

What may be the last remaining TDR-1 is on display at the Naval Aviation Museum in Pensacola. 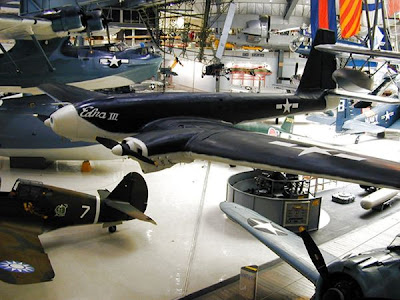 You may not have heard much about this Navy effort both because it was kept secret until 1990 and because of its relatively short life span. But give a salute to the men who were trying hard to make it work.
Posted by Mark Tempest at 9/27/2009 09:23:00 PM