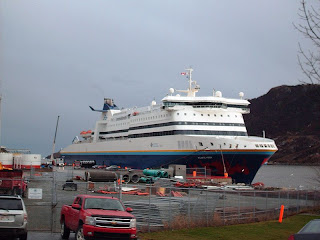 Reported as Police respond to bomb threat aboard Atlantic Vision:

Members of the Port aux Basques RCMP have responded to a bomb threat aboard the Atlantic Vision.

Sgt. Wayne Newell of the RCMP said at approxametly 10 a.m. this morning, police responded to a bomb threat aboard the Atlantic Vision. The threat indicated that the bomb would explode at 3 p.m. today.

"The RCMP is working closely with Marine Atlantic in the execution of their emergency operations plan to ensure the safe evacuation of all persons." said Sgt. Newall.

Apparently a hoax, but still disruptive. Atlantic Vision is a ferry operated by Marine Atlantic between Newfoundland and the Canadian mainland.