A warning of a couple of containers adrift of Papua New Guinea with a potential punch:

Shipping operators with vessels off the north-western coast of Papua New Guinea have been warned to watch out for two explosive-filled containers that are floating in the area.
The two containers were among eleven that were lost off the MV Linir Express on Sunday in heavy sea conditions off the Huon Gulf district. It’s possible that the containers may be submerged below the surface and therefore pose a considerable risk to shipping in the area.
The PNG's National Maritime Safety Authority (NMSA) has issued a warning stating: 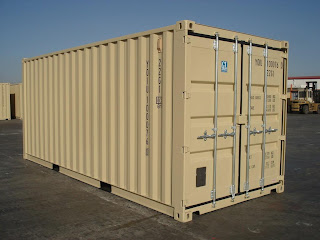 “All vessels entering and leaving Lae port or passing through the area are to navigate with extreme caution and report any container sightings indicating their position to the NMSA in Port Moresby. Some containers may contain explosives.
“Government authorities responsible for removing explosives from danger zones, the Papua New Guinea Defence Force's Explosives Ordinance Disposal Unit, had been informed about the incident on Wednesday.”
The type of explosive has not been revealed with official statements simply stating the containers carried were a Type B substance.

Such containers may be hard to see, though their explosiveness may be overstated.

I wouldn't want to test them, though.