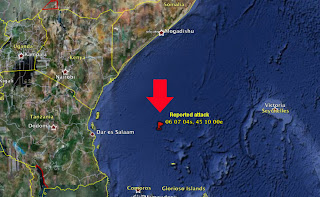 Somali pirates seem to be expanding their striking area - creating more of a challenge for counter-piracy forces. Early report of a "suspect vessel":

25/10/2009 13.19 UTC *Suspect Vessel Somali Basin (06 07.7S,045 10E) ---WARNING WARNING WARNING--- At 0845 UTC a suspect white plastic hull with 6 people on board has been detected in position 06 07.7S 045 10.0E It is recommended that all vessels not making scheduled calls to ports in Somalia, Kenya or Tanzania keep as far from the Somali coast as possible. MSCHOA now advise that vessels should consider maintaining a distance of more than 600 nautical miles from the coastline and when routing north/south consider keeping East of 60E Longitude until East of the Seychelles. All vessels transiting the area and not able to keep 600 nm off the Somali coast are advised not to approach closer than 100 nm from the position given in this report and maintain maximum CPA with any ship acting suspiciously. While navigating in the region vessels are urged to operate at a heightened state of readiness, maintaining strict 24 hour anti-piracy visual and radar watches, actively implement recommended anti-piracy measures and regularly report their position/course/speed to UKMTO.

There is some indication the method of locating the "suspect vessel" was an unsuccessful attack on a ship transiting the area.
UPDATE: IMB reports the attack here: 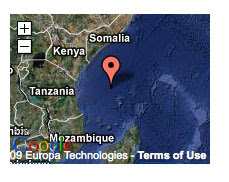 Six pirates armed with machine guns in a white plastic hull speedboat, chased a container ship underway. Ship raised alarm, adopted anti-piracy preventive measures and increased to maximum speed. At a distance of about three cables, pirates started firing at the ship. The pirates eventually aborted the attack and the vessel continued underway at maximum speed.