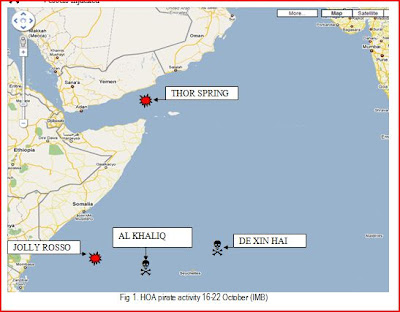 Summary of the week 16-22 October 2009
There are four incidents to report in this period.

Vessels Fired Upon:
1. INDIAN OCEAN: RORO vessel (JOLLY ROSSO) fired upon 22 Oct 09 at 0415 UTC while underway in position 03:45.28S - 046:43.24E, approximately 375NM southeast of Kismaayo, Somalia. On board the Italian ship, no one was injured and the only damage that was caused was due to machine gun fire from the aggressors. The pirates seem to be a group of four, using light weapons to fire from a skiff. The master of the JOLLY ROSSO employed evasive maneuvers and avoided boarding. (IMB, AGI)

2. GULF OF ADEN: General cargo ship (THOR SPRING) fired upon 16 Oct 09 at 1405 UTC while underway in position 13:43.5N – 050:55.5E. One skiff with 5-6 armed men onboard chased and opened fire on the vessel. The master increased speed, conducted evasive maneuvers and headed towards a coalition warship. The vessel had rigged barbed wire along the railing and activated fire hoses. The skiff chased the vessel for approximately 40 minutes before aborting the attempt. The funnel, stern area, and accommodation were damaged due to the firing. No injuries to the crew were reported (LM: Times of Malta, IMB). 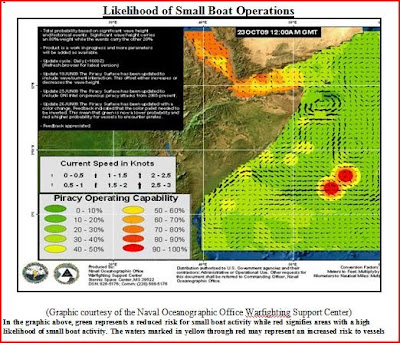 Forecast for Week of 23-29 October 2009
As the summer monsoon season has come to an end, weather conditions continue to be conducive to small boat operations in the Indian Ocean off the east coast of Somalia, and in the Gulf of Aden. Mariners are warned to remain vigilant in their counter-piracy measures as an increase in aggressive small boat activity is expected in the coming weeks. Somali pirates currently hold fewer vessels for ransom than they have shown recent capacity to hold. This week, ONI assesses the risk of pirate attacks is high in the Indian Ocean with increased risks in the areas in vicinity of the Seychelles (Port Victoria: 04:37S – 055:27E) noted by the red circles on the image below. Please note pirates south of the equator in the Indian Ocean have recently demonstrated the ability to operate in the capability range of 20-30%. Prevailing currents are significant between latitudes 1 and 5 degrees south and tend to flow in an easterly direction with speeds up to 3.5 kts. Therefore, increased risk of attack exists due east of the Somali coast out as far as 900NM between these latitudes. The Gulf of Aden remains a prime operating area for Somali pirates.