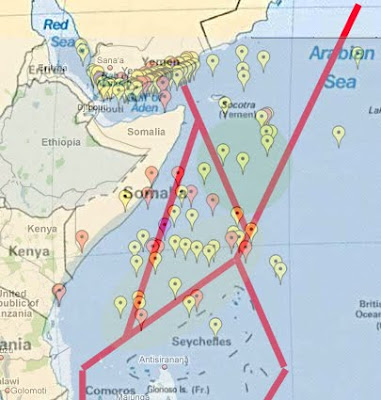 The most recent ship captured by Somali pirates shows that fortune may favor the bold, as the pirates, using mother ships, are able to move operations into sea lanes that have shifted ever farther off their coast. See here:

The International Maritime Bureau’s Piracy Reporting Centre in Kuala Lumpur sent out a warning to shipping following the hijacking.

With the improved weather conditions following the end of the monsoon season the number of attacks has been picking up.

I have overlaid the 2009 pirate attack to date over a map showing commercial sea lanes off east Africa. Although the overlay is slightly off (due to my lack of both Photoshop skills and time), it still makes the point that sea lanes is where pirates do their work. These lanes are fairly well fixed, given the ports of call along the routes and the islands that need be ducked. In fact, despite a spate of recent news articles about the pirates using modern electronics to find passing cargo ships, they are more likely to be camping on these sea lanes and waiting to see who wanders by.

Move the sea lanes, the pirates simply will move with them.

In fact, given the nature of the ships they attack, it seems clear to me that the attacks are not based on any sort of grand intelligence network but more strikes of opportunity, akin to a spider waiting for a fly to wander into its web.

If it were otherwise, I doubt some pirates would have attacked an armed French replenishment ship or fishing vessels carrying armed troops.

If you want to slow down the pirates, as has been done in the Gulf of Aden, you need to get smart on protecting sea lanes:

Put helicopters and UAVs in the air and learn the local fishing patterns to find the "fishing boats" that don't act like the others. Use the helicopters to scout routes ahead of merchant ships. 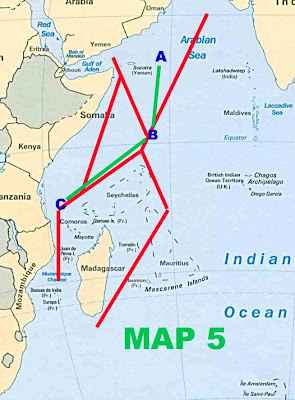 Now, I know very well that what I said before about time and money are negative motivators for merchant ships to wait for convoys to be formed. And, after all, the odds of being nabbed by pirates are pretty slim. However, there are some risk adverse ship owners who will accept the convoys, especially if their insurance carrier will lower premiums for convoy participants.

I said it before and I'll say it again - given a chance - convoys work.

But at some point the "maintain your distance from Somalia" line cannot be pushed much further out. 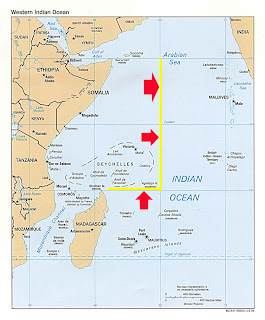 Mariners either planning or who are currently undertaking voyages through waters off the coast of Somalia are advised that the seasonal beneficial effects offered by the south-west monsoon season are now diminishing. As a result, EUNAVFOR’s Maritime Security Centre Horn of Africa, (MSCHOA) is standing down its information weather bulletin, dated 2nd July 2009 regarding weather routing during the SW monsoon.

Therefore, ships transiting south and east of the coast of Somalia to ports outside of east Africa, should consider navigating to the east of Madagascar, east of 60 east and south of 10 south.