A group of Somali pirates nabbed a Chinese merchant ship about 700 or so miles off Somalia (see here). Now, according to the AFP: "China vows 'all-out efforts" to rescue hijacked ship":

China vowed Tuesday to make "all-out efforts" to rescue a Chinese cargo ship hijacked by armed Somali pirates in the Indian Ocean northeast of the Seychelles.

"We will continue to follow developments closely and make all-out efforts to rescue the hijacked ship and personnel," foreign ministry spokesman Ma Zhaoxu told reporters, while giving no details of China's plans.

China sent three navy ships to the Somali coast in January to join world efforts to protect shipping in the region from pirates and has previously come to the aid of some stricken vessels, Chinese state media reports have said.

The pirates, as usual, threaten the crew of the ship, as set out here:

SOMALI pirates are threatening to execute seafarers on board hijacked Cosco Qingdao panamax De Xin Hai if any attempt is made to recover the vessel, according to a report carried on Radio Television Hong Kong. The station said it was quoting an associate of the captors, but did not give his name.

The development comes after the Chinese authorities confirmed that an “all out” effort is to be mounted to take back the captured 2008-built, 76,432 dwt bulk carrier and its crew of 25. Some local military sources have suggested that the Chinese navy, which has assets in the Gulf of Aden, is already working on a rescue plan.

UPDATE: Not surprisingly, the ship is headed for Somalia. Max speed 14.5 knots - which means the Chinese have less than 48 hours to interdict while it is in transit. Ship was reportedly enroute from South Africa to India when captured.

UPDATE2: Known Chinese naval forces in the region include the Zhoushan missile frigate and the Xuzhou missile frigate, both shown in photo nearby exercising in the Gulf of Aden with a Russian ship: 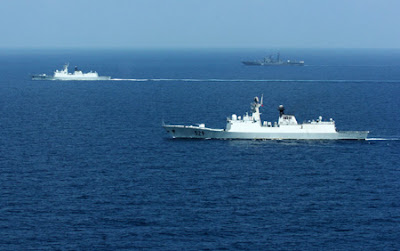 Merchant ship photo from ShipSpotting.com copyright by "tropic maritime photos, Australia" and is used in accord with ShipSpotting rules.
Posted by Mark Tempest at 10/20/2009 07:40:00 AM