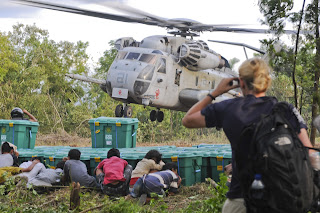 PADANG, Indonesia (Oct. 11, 2009) A relief agency worker photographs children from Hula Banda village as they use ShelterBoxes for cover from the prop blast of a CH-53E Sea Stallion helicopter assigned to Marine Medium Helicopter Squadron (HMM) 265. Each ShelterBox contains materials to sustain a family of 10 for several weeks. Amphibious Force U.S. 7th Fleet is coordinating U.S. military assistance to victims of the recent earthquakes in West Sumatra, at the request of the Indonesian government. (U.S. Navy photo by Mass Communications Specialist 2nd Class Greg Johnson/Released)

The purpose of Shelter Box USA, Inc. is to provide victims of disaster with shelter, by supporting the efforts of the Shelter Box Trust.

The function of Shelter Box USA, Inc. is, within the USA, to raise the money that provides the shelter for disaster victims.

Shelter Box is a grassroots Rotary club project which has rapidly grown to an international level.

The Shelter Box project was conceived and developed by Tom Henderson, a member of the Rotary Club of Helston-Lizard, Cornwall District, in Great Britain as their Millennium Service Project. Struck with the urgent world-wide need for a self-contained emergency shelter unit when disaster occurs, Tom designed a tent, researched suppliers and, through trial and error, developed the Shelter Box.. The international relief agency Feed the Children, has called Tom's Shelter Box ‘the best disaster relief tool they have seen in their 20 years of experience'. Working primarily through UK Rotary clubs, Tom and his Rotary club has succeeded in exposing the Shelter Box project to over 25 million Brits and, as a result, distributed provided shelter for approximately one-third of a million people in the last six years.

In March, 2002, Tom approached the newly formed Rotary Club of Lakewood Ranch (near Sarasota, FL) to become the primary Rotary administrator for the Shelter Box program in the United State, known as Shelter Box USA. This commitment involves promoting Shelter Box not only through the established US Rotary club network but to other community groups, corporate groups and individuals, as well. ShelterBox USA became a non profit 501(C)(3) organization, with a Board of Directors, in 2005.

As a result of exhibiting at the 2003 Rotary International Conference, Shelter Box USA was responsible for initiating two other national affiliates: Shelter Box Down Under (in Australia) and Shelter-Box Canada. Shelter Box Japan is the newest global partner.

ShelterBox was founded by Tom Henderson, a Rotarian and former Royal Navy search and rescue diver. He saw that the aid response to most disasters was in the form of food and medicine to help people survive the immediate aftermath.

Little or no assistance was given in terms of proper shelter to help them through the first few days, weeks and months as they tried to rebuild their lives. ShelterBox was launched to fill that void.

In 1999, Tom started researching the idea, sourcing equipment and twisting arms to get the project off the ground. His persistence paid off in April 2000 when ShelterBox was launched and the Rotary Club of Helston-Lizard in Cornwall adopted it as its millennium project. Little did they know that it would become the largest Rotary club project in the world, with affiliates in eight countries.

So far as I know, neither Tom Henderson nor the Rotary Club have been nominated for or awarded a Nobel Prize for their efforts which now have provided shelter for over 1,000,000 people in emergencies. Main (UK) ShelterBox website.

Boxes are customized for different areas of the world: 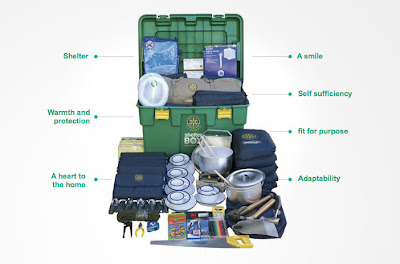 Only new equipment is used and is carefully selected for durability, practicality and suitability for where it is needed. Tough, lightweight and waterproof, the box itself can also have many useful functions from food container to cot. We also continually work with a range of manufacturers to improve the quality and extend the range of equipment that we have available.

A range of equipment is kept in stock. This lets us adjust the contents of the box according to local conditions and what is most urgently needed. Sometimes particularly if other resources are available locally and the overwhelming need is for shelter we will just send tents and pack two in each box.

Ten years ago we were trying to cobble together materials like this for refugees from Kosovo and for their return as cold weather approached.


Hat's off for Tom and the Rotary Clubs behind this project.