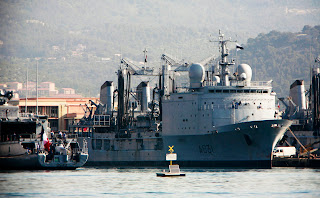 A group of Somali pirates goofed the other night by taking on a French navy ship, as reported in "Pirates hit navy ship 'in error'":

A group of Somali pirates has been captured after attacking a French navy ship by mistake, apparently thinking it was a harmless cargo vessel.

But the command and supply ship, the Somme, repelled the attack and chased the pirates, capturing five of them.
***
Admiral Prazuck told French TV station La Chaine Info the pirates seemed to be surprised that the navy ship fought back.

"Once they realised they were facing a ship that was responding and was heading towards them, they stopped shooting and attempted to flee," he said.

"The Somme gave chase and intercepted one of the pirates' boats. All the weapons had apparently been tossed into the sea and the suspected pirates are now being held on board the Somme."

It's an easy mistake to make from a small boat.

Could happen to anyone - anyone who was out pirating at night in a small boat... 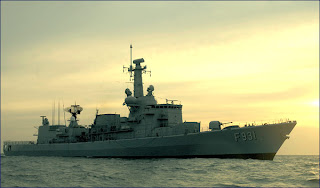 The skiff, took off at great speed and refused to stop when ordered to do so by Louise-Marie. The helicopter of the Louise-Marie fired two bursts of warning shots with their on-board machine gun after which the skiff stopped and was subsequently boarded for a thorough search.
Although no weapons or ladders were found, 13 fuel drums were discovered. The skiff’s crew stated that they were fisherman but no fishing material was found. They were warned about high speed approaches to merchant vessels and then released to continue on their way.