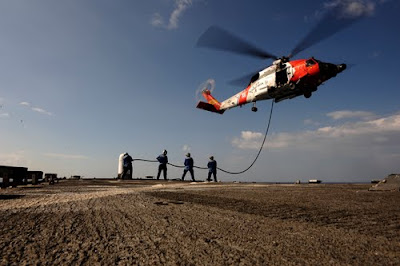 CARIBBEAN SEA- Crew members aboard Coast Guard Cutter Hamilton, a 378-foot based in San Diego, Calif., work together to hold a fuel hose steady for a Jayhawk rescue helicopter aircrew while they refuel and hover above the ship's flight deck, Monday, Jan. 25, 2010. Both crews are working in support of Haitian relief operations to provide aid and support to the people of Haiti following an earthquake that left many injured and homeless. (U.S. Coast Guard photo by Petty Officer 2nd Class Etta Smith)

Email ThisBlogThis!Share to TwitterShare to FacebookShare to Pinterest
Labels: Haiti, US Coast Guard