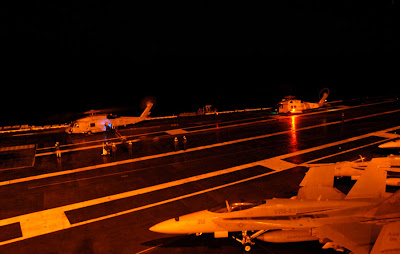 USS DWIGHT D. EISENHOWER, At Sea (NNS) -- Only hours after departing for its 2010 deployment, Nimitz-class aircraft carrier USS Dwight D. Eisenhower (CVN 69) diverted from flight operations to assist the U.S. Coast Guard in a rescue at sea the night of Jan. 2, saving the life of a stranded mariner.

Responding to a vessel-in-distress call, the U.S. Coast Guard requested Eisenhower's aid in the successful extraction of a man whose sailboat had capsized in rough waters approximately 300 miles off the coast of Elizabeth City, N.C. Eisenhower immediately changed course and sailed at high speed toward the distressed mariner.

Initially, a Coast Guard Helicopter planned to only land on board Eisenhower to refuel before proceeding to the scene, but more immediate action became necessary when news came that the boat's main mast had broken and was taking on water, explained Lt. j.g. Randolph Moyer, one of Eisenhower's tactical action officers.

The U.S. Coast Guard and the U.S. 2nd Fleet Maritime Operations Center coordinated to identify the Eisenhower and its air assets as the quickest and safest way to rescue the mariner.
The "Nightdippers" of Helicopter Anti-Submarine Squadron (HS) 5, launched a search and rescue (SAR) team to extract the mariner from 18 to 21 foot seas and winds peaking at 45 knots.

A Coast Guard C-130 dropped two life rafts for the mariner after the waves destroyed the sailboat's mast. The mariner abandoned his sinking boat and struggled for nearly an hour in the high seas to reach one of the life rafts. The Coast Guard airplane offered aerial support by directing the SAR helicopter through both snow and rain to the life raft.

Lt. Cmdr. Scott Pichette, the helicopter aircraft commander, said the experience and professionalism of the crew made it possible to complete the challenging mission.

"Most of us have been in for almost 18 years, and those were some of the biggest waves any of us had seen," Pichette said. "Mother Nature threw bad weather, ice, snow and hail making it a stretch for us and the helicopter."

Need said it was the collective effort that made the extraction possible.

"We went over every possible scenario during the transit. The communication made the mission go smoothly," he said.

The copilot for the SAR mission, Cmdr. Byron Ogden, explained that while the conditions were treacherous, the cooperation between the SAR team and the Coast Guard made the mission a success.

"This is honestly one of the most varsity things we could do as far as SAR goes," said Ogden, "I didn't hear one bit of panic in anybody's voice; the whole crew was very calm, cool and collected."

The mariner was treated briefly aboard Eisenhower before being transferred to a Coast Guard helicopter and flown to an Elizabeth City medical facility.

According to Brandon, even after the ordeal, the mariner was in good spirits and grateful to have survived. "With those conditions, he was lucky he made it."

Photo caption: an.3, 2010) A SH-60H Sea Hawk assigned to the "Nightdippers" of Helicopter Anti-Submarine Squadron (HS) 5, left, lands on the flight deck of aircraft carrier USS Dwight D. Eisenhower (CVN 69) after successfully extracting a stranded mariner of the coast of North Carolina. Responding to a request for aid and assistance from the U.S. Coast Guard, Eisenhower launched a Search and Rescue team in rough weather conditions. Eisenhower departed Norfolk, Va., Jan. 2, for a scheduled deployment supporting and 6thFleet and 5th Fleet areas of operation. (U.S. Navy photo by Mass Communication Specialist 3rd Class Christopher Baker/Released)
Posted by Mark Tempest at 1/05/2010 09:59:00 AM