Thanks to Fred Fry and others for noting the very ironic pirate "call for help" from anti-pirate forces.

The group that hijacked the ship had earlier made a deal with another pirate gang so the VLCC could be anchored at Haradhere – in return for a portion of the ransom, they told the newspaper.

The first group had been preparing to receive the ransom yesterday when the second group surrounded the tanker, accusing their rivals of planning to take a bigger share than agreed, the report said. Gunfire began.

Pirates aboard the tanker even asked EU NAVFOR for help in keeping away the rival faction at bay, the Journal said, but that was rejected.

The battle ended after clan heads intervened, and the ransom was received and divided, the report said.

The Haradhere pirates then returned to shore where they turned on each other, the newspaper reported, adding that at least three pirates were killed by the end of day.

That's about $2.3 million per dead pirate. 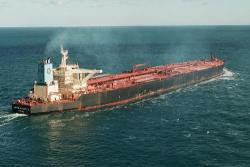 If you can't trust your fellow pirates and the EU turns you down, where do you turn?