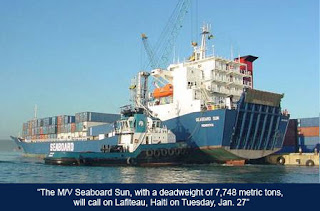 Seaboard Marine is resuming vessel calls to Haiti and will have the first liner vessel to call in the Port-au-Prince area since the massive earthquake of January 12. The M/V Seaboard Sun, a RoRo vessel with a deadweight capacity of 7,748 tons, will call on the Port of Lafiteau on January 27, 2010. Lafiteau is less than ten miles from Port-au-Prince and has clear roads to the main part of the city. Our local personnel are currently repairing and securing the dock and facilities at Lafiteau.

Although the Seaboard Sun can carry all types of rolling cargoes, initial efforts will be solely restricted to humanitarian goods and infrastructure relief projects routed through major international relief entities and U.S. government agencies. The Seaboard Sun will initially utilize a specialized ramp to discharge cargoes. In order to maximize its vessel calls into Lafiteau, the ship will shuttle back and forth between Kingston, Jamaica and Lafiteau. Seaboard Marine has two vessel calls per week from Miami to Kingston and also weekly calls to Kingston from Brooklyn and Fernandina Beach. Cargoes will be relayed over Kingston on to the Seaboard Sun which will provide an all-water service to Port-au-Prince. The Seaboard Sun will call again on Lafiteau on January 30.

We are working closely with government partners and relief agencies. The logistical challenges are immense. As a result, cargo bookings are limited to those groups with consignees that have proven, secure and effective distribution networks in Haiti. Seaboard is committed to moving relief aid in the most efficient manner possible and it is critical that discharged containers be moved quickly to the distribution points and emptied immediately. We apologize for initially not being able to take bookings from all customers but we expect that such restrictions can be eased as the situation stabilizes.

UPDATE: Red arrow points to where I believe Port of Lafiteau, red blob is PaP airport. 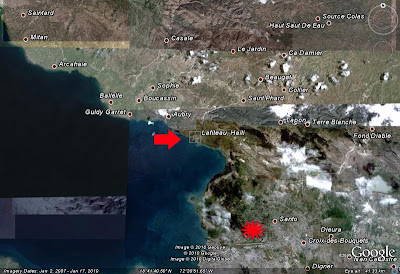