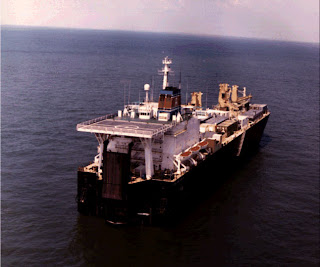 Haitian officials are planning a massive relocation of 400,000 people from makeshift camps to the outskirts of the capital as the U.S. government tackles repairs to the damaged main port — dual efforts to help residents survive the aftermath of the catastrophic earthquake.

The plan to temporarily relocate thousands is aimed at staving off the spread of disease at hundreds of squalid settlements across the city where homeless families have no sanitation and live under tents, tarps or nothing at all.

***
To that end, the U.S. Army, Navy and Coast Guard are looking to repair the Haitian capital's only functional industrial pier, which is key to the country's receipt of massive aid shipments. Officials say success of the project, which involves underwater construction teams and Navy divers surveying the damage, also is critical to the nation's long-term recovery.

Only four ships have been able to dock at the partially damaged pier since the earthquake. Unloading is lengthy and difficult because 15-inch wide cracks run through the dock, allowing only one truck to drive on it at a time. The port's cranes now tip dangerously into the sea or were rendered useless. 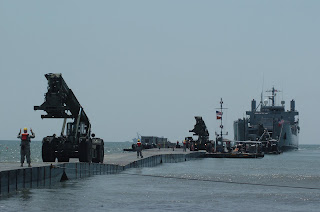 The word I have heard is that USNS 1st Lt. Jack Lummus will be arriving today with the vital military "insta port" stuff. More on "insta port" here, here and by clicking on label "JLOTS" below. 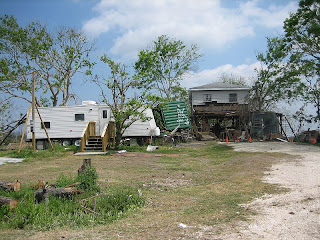 How about shipping some FEMA trailers down to Haiti for housing? That might put some American workers back to work and they are lot better than the tents the NGOs love to set up.