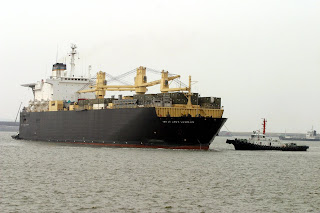 Lummus is loading supplies and equipment from both the U.S. Agency for International Development and the U.S. Marine Corps, as well as cargo from other U.S. government agencies.

USAID is providing more than 120 pallets of relief supplies, and more than 400 16-ounce bottles of propane for the shipment.

The Marine Corps is providing cargo to support the 22nd Marine Expeditionary Unit as it gives humanitarian assistance to the people of Haiti. The cargo includes dump trucks, bulldozers and other heavy equipment. The Marine Corps is also providing electrical generators, water purification units, lumber and building materials, and limited medical supplies.

The ship will also transport Navy lighterage - motorized and non-motorized barges - to transport the Lummus' cargo to shore.

It appears my earlier thought that the Seabee ship SS Cape May might be used to carry the Improved Navy Lighterage System was incorrect (I hope no one lost any money making bets on that) and the INLS will be carried on Lummus.

More on the INLS here:

The lighterage system was developed during World War II and a redesign began in the early 1990s.

"Our troops needed a platform that could perform faster, safer unloads in higher sea states," said Larry Mendlow, technical director for the Sealift Support Office at the Naval Facilities Engineering Command, which developed the new system with input from MSC. 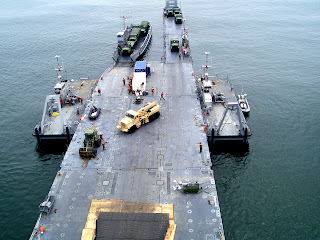 The new lighterage system is better able to operate even in sea state three — defined by winds of 14-15 knots and waves 3.5 to four feet. In addition, the new system's motorized ferry travels at up to 12 knots, 8.5 knots faster than previous ferries.

"They took the old system and made huge adjustments, increasing maneuverability, speed and stability so that beach groups will have a steadier, faster platform to work from," said Capt. Harry Bolton, Lopez's civilian master who has 33 years of experience in command of MPS.

One question that needs to be asked is why in the hell it has taken so long to get INLS moving to Haiti? It was one of my first thoughts (see here) on hearing the major port of Haiti was fouled, and I'm just an old retired hack.

As a MARAD spokesman was quoted in one other post, each ship can carry more than what 400 aircraft can. The US military should quit screwing around with Haitian airports and work on Haitian ports.

Getting the port even partially operational would allow officials to speed deliveries of humanitarian aid and supplies and relieve the airport, also making it easier to resume commercial flights to Port-au-Prince. Two other Haitian terminals, used to bring in fuel, have also been heavily damaged, said Reginal Villard, a Port-au Prince shipping agent.

Relief organizations and commercial shippers are chomping at the bit to get cargo in and unloaded. On Tuesday, the Coast Guard told Mr. Villard he could unload a barge carrying 123 containers of emergency aid towed by a tugboat from Alabama through Puerto Rico to Port-au Prince. But it would have to be done gingerly, he was told.

Crowley Maritime Corp., a Jacksonville, Fla., shipper which operates throughout the Caribbean, said it will conduct a test beach landing on Friday. A Crowley ship carrying 12 containers loaded with water and ready-to-eat meals will anchor off Port-au-Prince, a spokesman said. A smaller vessel, with a crane aboard, will be waiting to unload the containers and carry the supplies to the beach.

Crowley also plans to bring a barge in by Feb. 2 and "put it on the beach to have it serve as a makeshift dock," the spokesman said.