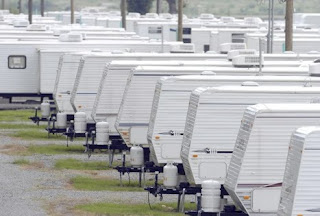 I suggested it here, the Recreational Vehicle Industry Association suggests it here:

The use of travel trailers turned out be be a PR disaster for the Bush Administration when, less than a year later, unusually high levels of formaldehyde, a known carcinogen, were found in a small number of trailers. A clutch of class-action lawsuits were filed subsequent to this revelation which may deter the current administration from shipping these trailers to Haiti. Richard Coon, President of the RVIA, was interviewed recently by RVBusiness.com and said, ”there are units..that the Haitians could use for housing and so could the people who are going down there to help...I’m sure the Haitians would love to have an RV or a (FEMA) temporary housing unit.”

Formaldehyde fears are raised here by a US representative who rejects the shipment of the trailers to Haiti:

The chairman of the House Homeland Security Committee has revived concerns over unhealthy levels of formaldehyde in trailers used by victims of Hurricane Katrina as the Federal Emergency Management Agency (FEMA) explores using the trailers to house victims of Haiti’s earthquake, according to the website Homeland Security Today.

Rep. Bennie Thompson, D-Miss, wrote to FEMA Administrator Craig Fugate on Friday (Jan. 15) to voice his concerns over the idea of sending the trailers to Haiti to deploy them as temporary housing units for victims of the 7.0 earthquake that struck the nation on Jan. 12.

“As you know, I have expressed great concern for the safety of these units due to the presence of formaldehyde. While I continue to believe that these units should not be used for human habitation, I do believe that they could be of some benefit on a short-term, limited basis if the appropriate safeguards are provided,” Thompson wrote in the letter.
***
But despite good intentions, the decision by FEMA to auction more than 100,000 of the trailers through the General Services Administration could pose a threat to public health, the congressman protested.

Thompson requested that FEMA suspend the auction and sell only small numbers of trailers to government or non-profit organizations that could rehabilitate the trailers to make them safe for long-term habitation.

FEMA and the Centers for Disease Control and Prevention (CDC) released a study on Feb. 14, 2008, that determined the temporary housing units contained unhealthy levels of formaldehyde. The CDC concluded that a random sampling of the trailers revealed average levels of formaldehyde of about 77 parts per billion (ppb) in each unit. Exposure to such levels of formaldehyde, intended to keep the trailers clean and preserved, could increase risks of cancer and respiratory sicknesses, CDC warned.
(RVBUSINESS.com editors’ note: Only six of 519 travel trailers tested by the CDC were found to have formaldehyde levels in excess of those established by the U.S. Department of Housing and Urban Development for manufactured homes.)

Given the hype of trial lawyers suing the trailer manufacturers, it it difficult to determine how much of a threat is posed by the trailers. However, see here.

Berkeley researchers said they found "exceptionally large emissions of formaldehyde" in units tested and traced the chemical's presence to extensive use of cheap, light plywood and particleboard for walls, flooring and cabinet surfaces. At the same time, trailers "are not outfitted for adequate ventilation and are tighter than would be desired for housing with such small volume," they said.

Email ThisBlogThis!Share to TwitterShare to FacebookShare to Pinterest
Labels: Haiti