Almost as anticipated here, the Somali Shabaab thugs blame everyone but themselves for the World Food Program withdrawal of food distribution in Somalia, as set out in "Islamist group condemns WFP suspension of operations in Somalia":

Somalia's hard-line Islamist Al Shabaab movement dismissed the decision by the UN's food agency to suspend its operation in southern Somalia over insecurity as "lies and propaganda."

The UN World Food Program (WFP) said Tuesday it was forced to suspend its operations in southern Somalia due to rising insecurity.

"The WFP said that it was suspending its operation in south Somalia because of insecurity that is lies and propaganda. The area controlled by Al Shabaab movement is one of the most peaceful areas in Somalia ," Ali Mohamoud Rage, spokesman for the Al Shabaab movement which controls southern Somalia, told reporters in Mogadishu.

WFP said in a statement that rising threats and attacks on humanitarian operations, as well as the imposition of a string of unacceptable demands from armed groups, have made it virtually impossible to continue reaching up to one million people in need in southern Somalia.

The Al Shabaab spokesman said they did not order the UN agency to leave, nor did they impose any restrictions on it. The movement only asked the WFP to buy grains from local farmers to give out to needy, he added.

"We have not ordered WFP to leave the country but we have only asked them to buy local people's produce to give outs as food aid, if it ever gives anything, so that our farmers become more productive which is in the interest of the farmers and the Somali Muslim people as a whole," the spokesman said.
****
TThe Islamist group's spokesman said the movement considers the name of the UN agency to be against the teaching of Islam.

"First of all we tell the people that the name of World Food Program is against the Islamic doctrine because Islam believes that the program of feeding the world is for Allah only and it is He who feeds every living being on earth and no human being can do that."

The UN agency said its offices in Wajid, Buale, Garbahare, Afmadow, Jilib and Belet Weyne in southern Somalia are temporarily closed, and that food supplies and equipment have been moved, along with staff, to safer areas in order to ensure that food assistance continues to reach as many vulnerable people as possible.

He accused the agency of favoring American farmers over Somali farmers by refusing to buy grains from local farmers, but WFP saidlocal production in the last five years averaged only about 30 percent of food needs in the Horn of Africa nation, which has been without an effective central government for more than two decades. (emphasis added)

It's nice to know that Shabaab doesn't have anything against the WFP except its name and how it does business.

More on the WFP view here. And a show on where the food comes from here. 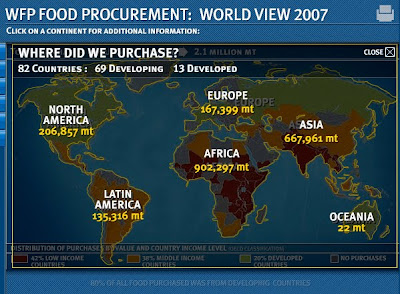