Odd sort of synchronicity, I'm sure.

But an Iranian nuclear scientist happened to be in the wrong place at the wrong time when a bomb mysteriously went off.

Iranian nuclear scientist Massoud Ali Mohammadi was killed on Tuesday in a rare bomb attack in Tehran which the government blamed on "mercenaries" in the pay of archfoes Israel and the United States.

The killing comes amid an increasingly bitter standoff between Iran and world powers over Tehran's controversial nuclear drive, which the West suspects is masking an atomic weapons programme.

Mohammadi, a particle physics professor at prestigious Tehran University, died when a bomb strapped to a motorcycle was triggered by remote control outside his home in northern Tehran, state media said.

"One can see in preliminary investigations signs of evilness by the triangle of the Zionist regime, America and their mercenaries in Iran in this terrorist incident," foreign ministry spokesman Ramin Mehmanparast said.

"Given the fact that Massoud Ali Mohammadi was a nuclear scientist, the CIA and Mossad services and agents most likely have had a hand in it," Abbas Jafari Dolatabadi told the state broadcaster's news service.

Dolatabadi told the ISNA news agency that Mohammadi died when a booby-trapped motorbike parked outside his house exploded as he was getting into his car. 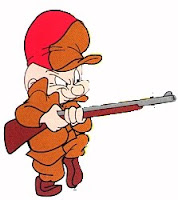 I wonder if it's hunting season?

UPDATE: Did the Iranians themselves take this guy out because he supported the student revolt? That idea from here.
Posted by Mark Tempest at 1/12/2010 08:46:00 AM