Neither "Horses or Bayonets" - Why the Size of the Navy Matters 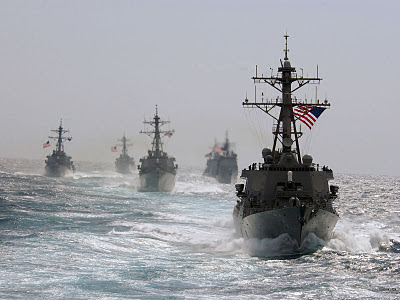 From the Third Debate:


ROMNEY: “Our Navy is old — excuse me, our Navy is smaller now than at any time since 1917. The Navy said they needed 313 ships to carry out their mission. We’re now at under 285. We’re headed down to the low 200s if we go through a sequestration. That’s unacceptable to me.”

OBAMA: “You mentioned the Navy, for example, and that we have fewer ships than we did in 1916. Well, Governor, we also have fewer horses and bayonets, because the nature of our military’s changed. We have these things called aircraft carriers, where planes land on them. We have these ships that go underwater, nuclear submarines. And so the question is not a game of Battleship, where we’re counting ships. ”

Well,  I am counting ships. The Navy has, in fact, said this country needs a minimum of 313 ships to fulfill all the missions assigned to it. That 313, by the way, includes those marvels described by the President - aircraft carriers and submarines.

What do we actually have?

I put up a post that talked about the size of the fleet the other day. You can visit it here. In that post I discussed the size of the surface combatant force, which is on its way down to something under 108 ships. There are at least two more ships in commission today than at the end of the period shown in the chart above. One is a new LCS, USS Fort Worth, and one is USS Michael Murphy (DDG 112).

Now, for those you who might think a ship is a ship, let me suggest that there is a rather large difference between a ship intended to take the fight to an opposing force (a combatant) and the other ships which are intended to either support the combatants (the auxiliary force consisting of refueling and ammunition ships) and the "follow on force" designed to deliver land combat power from the sea (the amphibious force).

The total includes, as I have indicated, submarines (67 of which 14 are ballistic missile boats or strategic assets, the others are definitely combatants), aircraft carriers (10 after the Enterprise is decommissioned and before the Ford enters the fleet). We have 31 amphibs, 47 auxiliaries.

So, how do we use our fleet? From the Navy's own website::

USS Enterprise is on her way back home to be decommissioned after a zillion years of good and faithful service with a crew none of whom were born when she was commissioned in 1961. 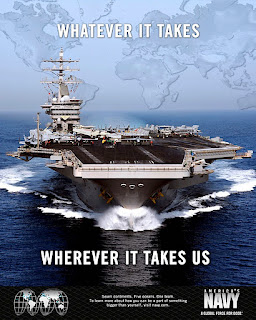 And, as noted in my earlier post, plans are to shrink warships while slowing the building of new ones.
What does it mean if we have fewer than 313 ships?

It means longer deployments for aging ships. It means a greater demand on a shrinking sailor "workforce" - it means that our carrier fleet, so condescendingly described by the President to Governor Romney, goes to sea with escorts that cannot then be used for other missions. It means the ships we do have are ridden hard. It means maintenance slips.

It means that, as many us who are former Navy officers keep saying, that at some point the Navy will have to tell the President that there are missions we cannot do because we don't have the ships, despite the language of the poster nearby.

We don't have the ships because we cratered to the Russians on anti-ballistic missile sites in Poland and decided to put ABM ships into the Black Sea or off Spain or someplace where they cannot be diverted to other missions.

We are scheduled to build 55 Littoral Combat Ships which are proclaimed to be the "Swiss Army Knives" of multi-mission warships, but only if they have their modules (which they don't quite yet), their helicopters and a logistics support system that, in my view, has not yet appeared. We will use these under-gunned, undermanned but expensively high speed ships to show the flag.

They may have a great potential - but do a Google search on "LCS" and then decide how you will feel when you or your son or daughter is assigned to one to "show the flag" to the growing Chinese fleet which, while it has problems of its own, has hardly under-armed the ships it obviously perceives it needs to push into the Cow's Tongue of the South China Sea.
.
As shown in my earlier post, of the 287 (+/-) ships of the U.S. Navy, less than 1/2 are meant to be combatant warships capable of gaining sea control by force. Amphibious ships and the auxiliary ships are "follow on forces" - they come in after the sea and air space are ours. Leave out the 10 carriers remaining after the Enterprise retires and we are scheduled to have 107 war fighting surface ships next year.

We are more than a "two-ocean Navy" - we operate world-wide, in the Pacific, Atlantic, Mediterranean, Indian Ocean, Arabian Gulf. We keep 40% of our force deployed; 15% in training for deployment; and the remainder in the shipyards for repair or in port doing other maintenance.

Why the heavy maintenance schedule? The sea is a harsh operating environment. And, unlike a company that operates a fleet of trucks or cars, we can't just pick up a bunch of the new model year from the local dealer. You have to have a plan - have a strategy and build a fleet to match that strategy.