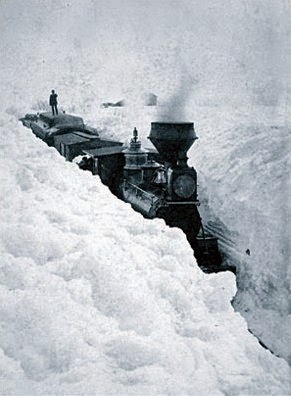 Been fun to see the usual griping about "how the weather forecasters blew it" in their predictions of the putative "great blizzard of 2015." Over the years I've had plenty of meeting with professional meteorologists and to a person they take their jobs very seriously. They are wounded by "missing" a forecast. In their defense, there are so many variables in weather that a forecast covering all the possible contingencies is virtually impossible.

What you need to know is that all forecasts are based on probabilities - founded in science but still probabilities. If the one of the inputs changes slightly, a forecast can shift maybe 30 or 40 miles or more.

The mistake the forecasters make is in not revealing the manner in which they have to compare models and how they use the data they have to attempt to refine their predictions.

Its akin to being an experienced sailor who can "feel" a shift in the the wind before it actually happens.

The other mistake is made by the public that fails to grasp that there is a certain probability of error built into a forecast. See here:

The "Probability of Precipitation" (PoP) describes the chance of precipitation occurring at any point you select in the area.

How do forecasters arrive at this value?

Mathematically, PoP is defined as follows:
PoP = C x A where "C" = the confidence that precipitation will occur somewhere in the forecast area, and where "A" = the percent of the area that will receive measureable precipitation, if it occurs at all.

But, most of the time, the forecaster is expressing a combination of degree of confidence and areal coverage. If the forecaster is only 50% sure that precipitation will occur, and expects that, if it does occur, it will produce measurable rain over about 80 percent of the area, the PoP (chance of rain) is 40%. ( PoP = .5 x .8 which equals .4 or 40%. )

In either event, the correct way to interpret the forecast is: there is a 40 percent chance that rain will occur at any given point in the area.

The other thing to be aware of is that TV has spawned a "panic industry" that may misrepresent the probabilities of an event in order to generate rating. See Snow Job: Why the media hyped the big bad blizzard of 2015:


But we all know the drill. Television loves storms! Everyone shifts into team coverage mode. Reporters in parkas stand out in the snow and wind. Anchors stand in front of green-screen maps. It happens every winter, but it’s breaking news. Other news is whited out. “Hardball” turned into “Snowball.”

The real question is whether it's better to spool up in advance of an event with a low probability but a potentially high impact (e.g. 4 feet of snow in NYC) or discount the reaction because of a low probability. As Mr. Kurtz notes in the piece cited above:


I’ll cut the politicians some slack, since overpreparing for an overhyped storm brings a day of criticism, but being unprepared for a killer storm can paralyze a region for 10 days. Botching a snow cleanup has put several mayors’ jobs in jeopardy. “Hindsight is 20/20,” Cuomo said. “You act on the information you have at the time … I’d rather be a little safe than sorry.”


We need to learn that "mostly right" is pretty darn good. The meteorologists I know are working hard to move their percentages of "right" up.