Here's a good list to get you started for the week: 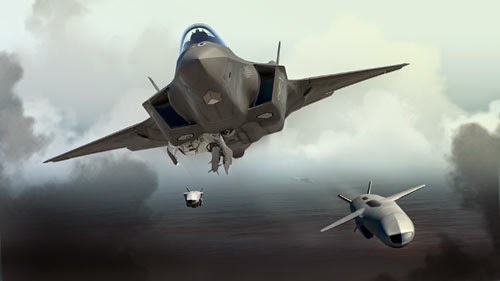 
With several new and upgraded aircraft and helicopters being fielded, the missile industry has entered an active phase.


In Northeast Asia, for instance, passages piercing the Ryukyus island chain funnel east-west passage between the East China Sea and Western Pacific into narrow pathways. Such pathways are easily monitored—and perhaps interdicted—relative to seeking out adversaries on the open ocean. The Malay Peninsula and Indonesian archipelago, similarly, corral shipping transiting between the South China Sea and the vast Indian Ocean into cramped shipping lanes.

Stationing UUVs at such geographic nodes would amplify the American presence, improving watchfulness for a fleet too small to be everywhere all the time. Such sentinels—especially if technology permits arming them for distant operations—will bolster the prospects for success in such missions as fleet actions, sea denial, blockades, and otherwise controlling major sea routes.


Hammer and Anvil: How to Defeat ISIS.


. . . [T]hree types of conflicts that were not on many lists but should be. Each, for different reasons, represents a trend worth paying attention to.

The Real Reason For The Poor State Of Military Morale:


The key factor is senior leadership that has not kept faith with its troops. The rest of the force that doesn’t live within the Washington, D.C., beltway feels that it is being ridden hard and put back wet so that the generals and admirals can claim success before civilian leaders in Congress and the White House. They have come to believe that they are expendable.