Tools for Looking for the Downed AirAsia flight 8501


The search has been hampered at times by bad weather, but divers with Mobile Diving and Salvage Unit 1 have launched their Tow Fish sonar system from an 11-meter rigid hull inflatable boat.

"That is a fairly sophisticated piece of technology that allows us to map the ocean floor, at least to be able to find wreckage and debris," said Rear Adm. John Kirby, the Pentagon spokesman.

First, let's look at what "side scan sonar" is. According to NOAA: 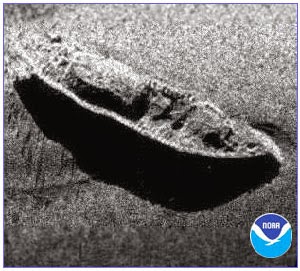 Side scan sonar is a specialized system for detecting objects on the seafloor. Most side scan systems cannot provide depth information.

Like other sonars, a side scan transmits sound energy and analyzes the return signal (echo) that has bounced off the seafloor or other objects. Side scan sonar typically consists of three basic components: towfish, transmission cable, and topside processing unit.

In a side scan, the transmitted energy is formed into the shape of a fan that sweeps the seafloor from directly under the towfish to either side, typically to a distance of 100 meters. The strength of the return echo is continuously recorded, creating a "picture" of the ocean bottom. For example, objects that protrude from the bottom create a light area (strong return) and shadows from these objects are dark areas (little or no return) as in the image at left above, or vice versa, depending on operator preference.


As noted above, the container that holds the active components of the side scan sonar being used is referred to as a "towfish" since it deployed by letting it sink to a predetermined depth and then towing it ("swimming" or "flying" it) along a path than allows the sonar to send its signals and return them to a receiver from which its electronic data is processed and converted into images of what the device was towed over.

For example, see the information at Tritech about its "SeaKing Towfish Sidescan Sonar":

The sonar 'fish' is designed to be easily deployed by hand with excellent stability under all towing conditions. Fitted with durable polycarbonate stabiliser fins, in the event of ground contact the fins will break away and are retained for recovery by a shock cord line.
****
As part of Tritech’s SeaKing range of sonars, sensors it is possible to run the SeaKing towfish with other SeaKing sensors over one communication link. All products in the SeaKing family (or third-party products within the ARCNET communications link), can be run simultaneously, using the same processor and display; such as Tritech’s Surface Control Unit (SCU) or a customer supplied PC or laptop. In addition to the display of side scan sonar data, the system will take position input from DGPS. This information is recorded with the side scan sonar data to allow a 'fix' of a target. The customer's own bit map chart may be displayed on the same screen as the sonar data.

All data produced by the subsea towfish is processed within the fish and transmitted to the surface in digital format. All data may be stored on the built-in hard disk drive, in the surface control unit. The post processing export facility will convert the logged data to XTF and CSV formats for third party software packages.

Processing the data is the job of software, such as SonarWiz from Chesapeake Technologies:


You work hard to get the data – make sure you see all that it has to show. SonarWiz sidescan and sub-bottom sonar mapping software helps with sonar mission planning, data acquisition and post processing to ensure you use your time on the water effectively and capture all of the data you need before heading back to port.
***
The new High Resolution capability for SonarWiz doubles the resolution of the earlier version, for sidescan waterfall, mosaic, and digitizer views of the data. Surveyors in all types of industries can use High Resolution mode to resolve smaller features and see finer detail to improve productivity, security, and safety.

An example of the combination of side scan sonar and SonarWiz borrowed from the Chesapeake site: