When journalists grab information from biased parties, we get bad reporting. Case in point, a Washington Post article, "Majority of U.S. public school students are in poverty" which apparently unquestioningly took "allegations" as true without looking further. WAPO reported


The Southern Education Foundation reports that 51 percent of students in pre-kindergarten through 12th grade in the 2012-2013 school year were eligible for the federal program that provides free and reduced-price lunches. The lunch program is a rough proxy for poverty, but the explosion in the number of needy children in the nation’s public classrooms is a recent phenomenon that has been gaining attention among educators, public officials and researchers.

If you go visit The Southern Education Foundation's website ("Advancing Creative Solutions to Assure Fairness and Excellence in Education") you can find a link to the cited report, or a least a report on the report, "A New Majority Research Bulletin: Low Income Students Now a Majority in the Nation's Public Schools":


In 40 of the 50 states, low income students comprised no less than 40 percent of all public schoolchildren. In 21 states, children eligible for free or reduced-price lunches were a majority of the students in 2013.

At this point, you are invited to download the "research bulletin" itself. You really need not bother, the "bulletin" merely states what the WAPO reported,

The pattern was spread across the nation. Half or more of the public schoolchildren in 21 states were eligible to receive free or reduced-price lunches, a benefit available only to families living in poverty or near-poverty in 2013.1


What the WAPO article and the Southern Education Foundation website fail to report is what the criteria are for qualifying for "free or reduced-price lunches" are. Instead in the Bulletin we are left with a footnote to "a benefit available only to families living in poverty or near poverty," which reads, in pertinent part:

If you go to the Eligibility Manual for School Meals, you will find a USDA document of 108 pages in which the basic statement of "income eligibility" above is confirmed (p14). There is also this:


United States citizenship or immigration status is not a condition of eligibility for free and reduced price benefits.(p31)

Here are the U.S. Department of Agriculture income guidelines:


‘‘income,’’ as the term is used in this Notice, means income before any deductions such as income taxes, Social Security taxes, insurance premiums, charitable contributions and bonds. It includes the following: (1) Monetary compensation for services, including wages, salary, commissions or fees; (2) net income from nonfarm self-employment; (3) net income from farm self-employment; (4) Social Security; (5) dividends or interest on savings or bonds or income from estates or trusts; (6) net rental income; (7) public assistance or welfare payments; (8) unemployment compensation; (9) government civilian employee or military retirement, or pensions or veterans payments; (10) private pensions or annuities; (11) alimony or child support payments; (12) regular contributions from persons not living in the household; (13) net royalties; and (14) other cash income. Other cash income would include cash amounts received or withdrawn from any source including savings, investments, trust accounts and other resources that would be available to pay the price of a child’s meal.
‘‘Income,’’ as the term is used in this Notice, does not include any income or benefits received under any Federal programs that are excluded from consideration as income by any statutory prohibition. Furthermore, the value of meals or milk to children shall not be considered as income to their households for other benefit programs in accordance with the prohibitions in section 12(e) of the Richard B. Russell National School Lunch Act and section 11(b) of the Child Nutrition Act of 1966 (42 U.S.C. 1760(e) and 1780(b)).

You might note that not only are some federal benefits excluded from "income," at least one "anti-hunger" program, Supplemental Nutrition Assistance Program (SNAP) by which poor families may qualify for an "allotment" (read "cash payment") is a virtually "automatic qualifier for free or reduced cost school meals.

Let's take our family of 4 earning $23,850. If you follow the SNAP guidelines as set out here, our family could receive an amount of say $300 per month in SNAP benefits, which can be used to buy:


Households CAN use SNAP benefits to buy:

You might note that this $300 per month, added to the family income, would, if not excluded by law, boost the family out of the "poverty" category. So would any "credit" given for reduced rent in public housing. So would any medical care covered by Medicaid. In any event, free school meals would seem to be a double benefit to the families receiving SNAP benefits.

Let's look at a family of 4 which has income of $44,123 per year. As you can see from the Eligibility Guide, the child of this family are eligible for "reduced" price meals.

What follows requires a knowledge of what a "median" is and what a "mean" is. For statistical purposes, here's a good lesson from Math is Fun. In a list of numbers, a median, then is the number above half of the remaining numbers are above it and half below. It is not an average. A "mean" on the other hand, is an average, as also set out in by Math is Fun:


The mean is the average of the numbers: a calculated "central" value of a set of numbers.

To calculate: Just add up all the numbers, then divide by how many numbers there are.

In his classic book, How to Lie with Statistics, Darell Huff covers how the differences between these terms can be used to confuse,

A quintile is one of five equal groups. So, each quintile referred to had roughly 24.4 million households in it.

Well, okay, but what does the average American earn? According to the Social Security folks:

Then there is this:

People, in this case, not households as we have been discussing. You should be aware this number can be skewed by young people working at jobs which pay little, because,


The medians for people are based on people 15 years old and over with income.


In Appendix B we get to "family" poverty. According to Table B-1, among all "families" 12.4% are in poverty. Note that this is different than being eligible for free or reduced fee school meals. In fact, it seems that the highest percentage of poverty exists in "Families with female householder, no husband present" where in 2013 some 33% of such households were in poverty. You can go examine the charts. They can be eye-opening.

It is also worth noting that "poverty" in the U.S. has little of a "static" component. From early in the report: 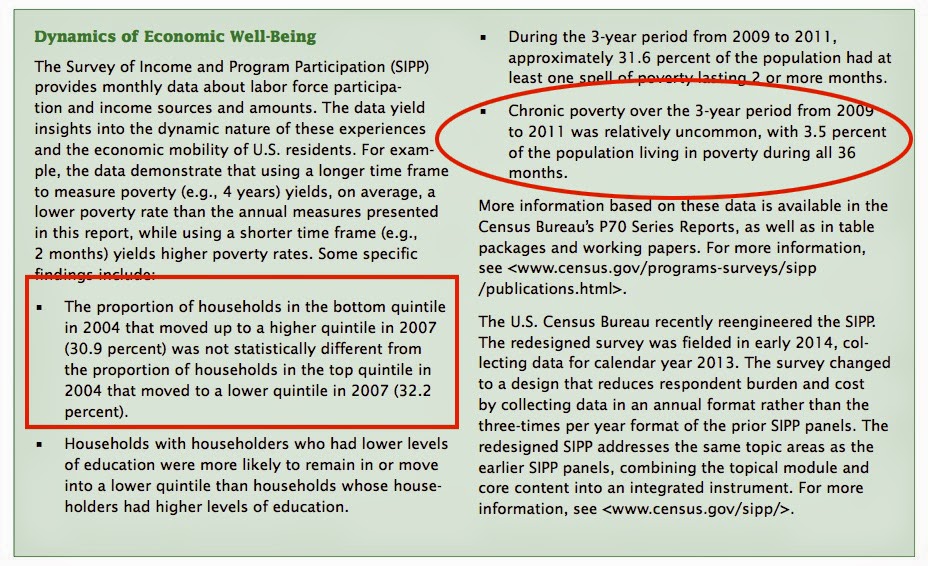 There is relatively little chronic poverty (oval) and people move up and down depending. For example, a high income earning family may drop down a quintile , say when retirement is reached and earned income decreases. A low income student family may move up when education is completed and a well-paying job is taken.

Enough. Let's go back to the free/reduced meal USDA chart and the 185% of the poverty eligibility for reduced cost meals.

Remember the "average" wage (see above) for 2013 was $43,041.39. No wonder the Southern Education Foundation is able to present such a skewed version of what has happened. It isn't just that we have that many more poor people, it is also driven by a very broad level of eligibility for this particular program.


The WAPO should have done some work on this topic and examined those numbers and provided its readers with additional information necessary to determine how great the alleged problem is, instead of relying on numbers provided by a single source.