Beijing is defending the deployment of anti-ship cruise missiles to Woody Island in the South China Sea, according to a Wednesday statement from the Chinese foreign ministry.

“China’s deployment of national defense facilities on its own territory is reasonable and justified,” ministry spokesman Hong Lei said on Wednesday.
“It has nothing to do with the so-called militarization.”

Revisit that double-speak again - putting missiles someplace - "“It has nothing to do with the so-called militarization.”

Orwell would be so proud.

Remember when a justification for their efforts in the South China Sea was:


Beijing has cast a peaceful light on its construction of airfields, ports and radar antennae on 800 hectares of new man-made islands in the South China Sea, claiming they are intended for humanitarian concerns like maritime search and rescue, disaster relief, and navigational security, and to aid environmental protection. (source)

Further, the Y-62 has a guessstimated range of about +180 miles. For my purposes, I bump it up to about 240 miles or about 380 km. Given that, here's a map of what arming the Paracels does to the threat area posed by the Chinese in the South China Sea with the area within the yellow lines being within the range of these missiles: 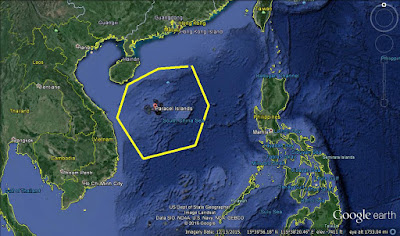 Now, is this any greater threat than from aircraft flying out of Chinese bases located on the mainland or Hainan Island? Sure - it's a time, distance and readiness issue if you think about it.