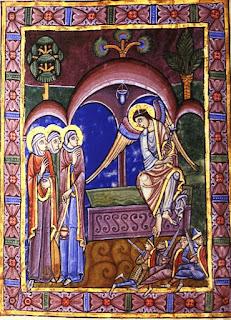 On the first day of the week, at early dawn, the women who had come with Jesus from Galilee came to the tomb, taking the spices that they had prepared. They found the stone rolled away from the tomb, but when they went in, they did not find the body. While they were perplexed about this, suddenly two men in dazzling clothes stood beside them. The women were terrified and bowed their faces to the ground, but the men said to them, "Why do you look for the living among the dead? He is not here, but has risen. Remember how he told you, while he was still in Galilee, that the Son of Man must be handed over to sinners, and be crucified, and on the third day rise again." Then they remembered his words, and returning from the tomb, they told all this to the eleven and to all the rest. Now it was Mary Magdalene, Joanna, Mary the mother of James, and the other women with them who told this to the apostles. But these words seemed to them an idle tale, and they did not believe them. But Peter got up and ran to the tomb; stooping and looking in, he saw the linen cloths by themselves; then he went home, amazed at what had happened.

Peter began to speak to Cornelius and the other Gentiles: "I truly understand that God shows no partiality, but in every nation anyone who fears him and does what is right is acceptable to him. You know the message he sent to the people of Israel, preaching peace by Jesus Christ--he is Lord of all. That message spread throughout Judea, beginning in Galilee after the baptism that John announced: how God anointed Jesus of Nazareth with the Holy Spirit and with power; how he went about doing good and healing all who were oppressed by the devil, for God was with him. We are witnesses to all that he did both in Judea and in Jerusalem. They put him to death by hanging him on a tree; but God raised him on the third day and allowed him to appear, not to all the people but to us who were chosen by God as witnesses, and who ate and drank with him after he rose from the dead. He commanded us to preach to the people and to testify that he is the one ordained by God as judge of the living and the dead. All the prophets testify about him that everyone who believes in him receives forgiveness of sins through his name."

What are we charged for this forgiveness?

Nothing in gold or silver, nothing in conquest or the forced conversion of others.

No, we are simply asked to believe.


Amazing grace! how sweet the sound,
That saved a wretch; like me!
I once was lost, but now am found,
Was blind, but now I see.

’Twas grace that taught my heart to fear,
And grace my fears relieved;
How precious did that grace appear
The hour I first believed!

The Lord hath promised good to me,
His word my hope secures;
He will my shield and portion be
As long as life endures.

When we’ve been there ten thousand years,
Bright shining as the sun,
We’ve no less days to sing God’s praise
Than when we first begun.