Report on Chinese Bluster over its absurd claims in the South China Sea by David Larter in Navy Times After U.S. show of force, China takes hard line on South China Sea:


China's foreign minister said his country's sovereignty claims are supported by history and made a veiled reference to the 5-day patrol by the Stennis Carrier Strike Group, as well as recent passes by China's man-made islands by destroyers Lassen and Curtis Wilbur in recent months.

"The South China Sea has been subject to colonial invasion and illegal occupation and now some people are trying to stir up waves, while some others are showing off forces," Wang Yi said, according to an Associated Press report, a day after the Stennis CSG departed the South China Sea. "However, like the tide that comes and goes, none of these attempts will have any impact. History will prove who is merely the guest and who is the real host."

Well, if you are China and in the need of some of this Chinese version of "lebensraum", you might as well continue to go with idea a claim of "history," no matter how absurd, trumps minor considerations like - say - international law.

As set out nicely in this Lawfare blog brief by Sean Mirski, The South China Sea Dispute: A Brief History, the situation created by China's claims is murky:


. . . In May 2009, Malaysia and Vietnam sent a joint submission to the Commission on the Limits of the Continental Shelf setting out some of their claims. This initial submission unleashed a flurry of notes verbales from the other claimants, who objected to the two nation’s claims.

In particular, China responded to the joint submission by submitting a map containing the infamous “nine-dash” line. This line snakes around the edges of the South China Sea and encompasses all of the Sea’s territorial features as well as the vast majority of its waters. However, Beijing has never officially clarified what the line is meant to signify. Instead, it has maintained “strategic ambiguity” and said only that “China has indisputable sovereignty over the islands in the South China Sea and the adjacent waters, and enjoys sovereign rights and jurisdiction over the relevant waters as well as the seabed and subsoil thereof (see attached map).” This could mean that China claims only the territorial features in the Sea and any “adjacent waters” allowed under maritime law. Or it could mean that China claims all the territorial features and all the waters enclosed by the nine-dash line, even those that exceed what’s permitted under maritime law. 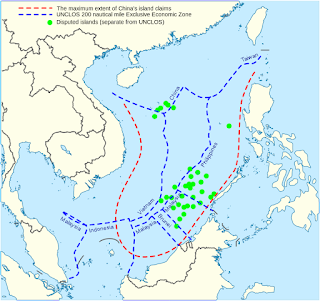 Beijing seeks to control the South China Sea in order to manage national security threats and advance its economic objectives. The Sea represents a strategic vulnerability for China, both as a historical invasion route and as a modern threat to its energy security and export-oriented economy

We discussed this during a recent Midrats show Episode 321: The Year of the Monkey in the South China Sea w/Toshi Yoshihara.


Many legal briefs which are weak on law and fact use a phrase like "It has long been held . . ." to justify some act or inaction. Here the Chinese want to by-pass history to shield a "sea grab" of immense proportions. Just as the reference to "colonial invasion" regarding a sea space as justification for China's assertion of some "superior to all others" claim of sovereignty over the SCS is very odd indeed, the fact is that neither history nor legal theories have a damn thing to do with what China is up to in the South China Sea.


. . . [S]upreme excellence consists in breaking the enemy's resistance without fighting.
***
Therefore the skillful leader subdues the enemy's troops without any fighting; he captures their cities without laying siege to them; he overthrows their kingdom without lengthy operations in the field.

After all, why fight when you can present the world with a fait accompli and then challenge them to get enough force together to push you off whatever you've claimed.