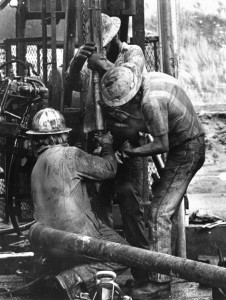 The overall weekly US rig count is now at its lowest point in Baker Hughes Inc. data that begins in the 1940s, and perhaps since the infancy of US oil and gas industry in the mid-19th century.
BHI reported that the count lost 9 units to 480 during the week ended Mar. 11, officially falling beneath the previous recorded low of 488 on Apr. 23, 1999, reached during the nadir of the 1998-99 industry downturn.
“While there is no consistent series for drilling activity before 1948, we think it likely that to find a lower level of activity would require going back to the 1860s, the early part of the Pennsylvania oil boom,” said Paul Hornsell, head of commodities research for Standard Chartered Bank, in a research note published last week (OGJ Online, Mar. 4, 2016).

Hmmm. Prices down, supply good, and oil reserves not being drained. And it looks like we'll just cycle up and down for the foreseeable future. Not such a good a thing for the rig workers, though.
Posted by Mark Tempest at 3/14/2016 09:57:00 PM